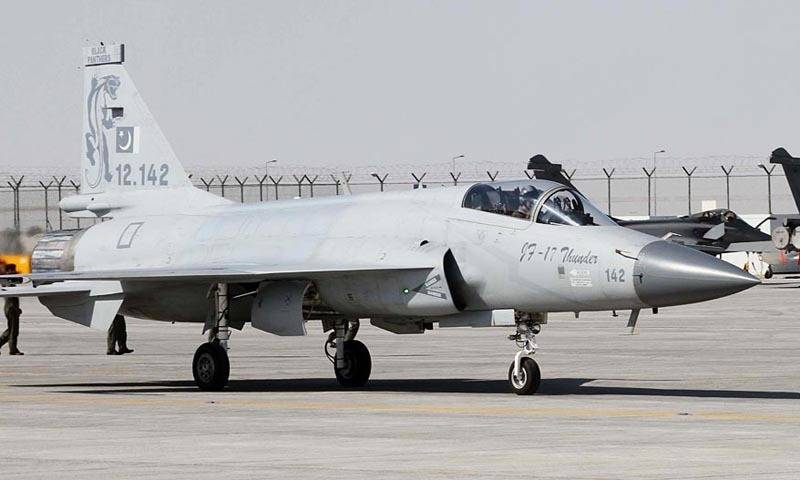 LAHORE - New JF-17 Thunder fighter jets, manufactured with coordination of China, have been inducted in 14-Squadron of the Pakistan Air Force.

A prestigious ceremony was held at Kamara where Minister for Defence Khawaja Asif was the chief guest while Chief of the Air Staff Air Chief Marshal Sohail Aman was also present. The defence minister inspected the guard of honour followed by an impressive fly -past.

The new fighter jets were also displayed at the ceremony and were inspected by Asif.

A total of 16 JF-17 Thunder aircraft have been manufactured jointly by China and Pakistan in the past year, Radio Pakistan reported.

The JF-17 Thunder, a single-engine multirole fighter jet, was jointly developed by China and Pakistan.

Development of the aircraft started in 1999, and the maiden flight was conducted in 2003.

The JF-17 can be equipped with the air-to-air and air-to-ground ordinance. The aircraft mounts both short-range infra-red air to air missiles along with longer ranged radar-guided BVR missiles, an essential capability for a front line interceptor.

The aircraft can carry 8,000lbs of an ordinance on seven external hardpoints, which is an adequate amount of ordinance for any mission profile. The JF-17 enhances the much-needed capability of the air force in beyond visual range (BVR) engagements.

The JF-17 is a capable platform and is on its way to form the backbone of the PAF. It was reported that between 250 and 300 aircraft will be inducted into the air force in order to phase out the ageing fleet of some other aircraft models that are still in operation.

For the Pakistan Air Force, the JF-17 fills the gap that had arisen due to an ageing inventory, which was further impacted by sanctions placed on the country following the nuclear tests in 1998.-Online