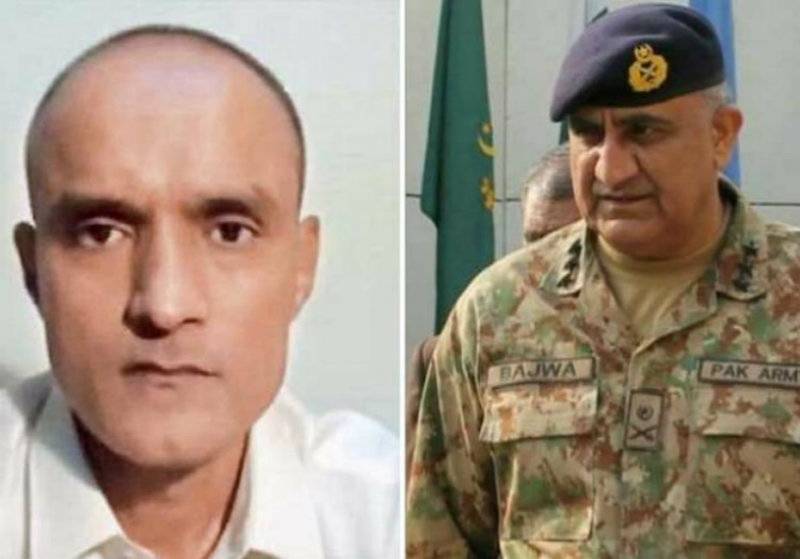 RAWALPINDI - Chief of Army Staff General Qamar Javed Bajwa is reviewing the proceedings of the Kalbushan Jhadav’s case and will take a decision on Indian spy’s mercy appeal on merit and justice, according to the Inter-Services Public Relations.

"All evidence and case proceedings are being examined by the army chief, and he will make a decision on the basis of merit and justice," ISPR Director General Maj Gen Asif Ghafoor said in a press conference Sunday.

A military court in Pakistan has already rejected the mercy petition of Kulbhushan Jadhav, the Indian national who was sentenced to death in April for terrorist and subversive activities on the behest of Research and Analysis Wing (RAW).

The mercy petition was filed before Gen Bajwa last month, said ISPR in a statement issued on June 22.

When asked to comment on the CIA contractor's book wherein he states former ISI chief Lt Gen (r) Shuja Pasha orchestrated his release from jail, the military spokesman said the Inter Services Intelligence (ISI) was not the only institute involved in the Raymond Davis affair.

The ISPR director-general also highlighted the situation along the Line of Control (LoC) has been "especially tense", with 580 ceasefire violations taking place in this year alone.

Current ceasefire violations have resulted in the highest number of civilian casualties than in the past, he added.

LoC violations appeared to be spurred by the heated political struggle for freedom in India-held Kashmir, Ghafoor said, adding that the intensification of cross-border firing, particularly in Azad Jammu and Kashmir, showed that India is "scared" and trying to divert attention away from the Kashmir struggle.

"India targets civilians in ceasefire violations," Ghafoor said. "The Pakistan Army doesn't think this is a good method. We fire towards bunkers where we think the firing is coming from. We try to keep civilian casualties to a minimum," he added.