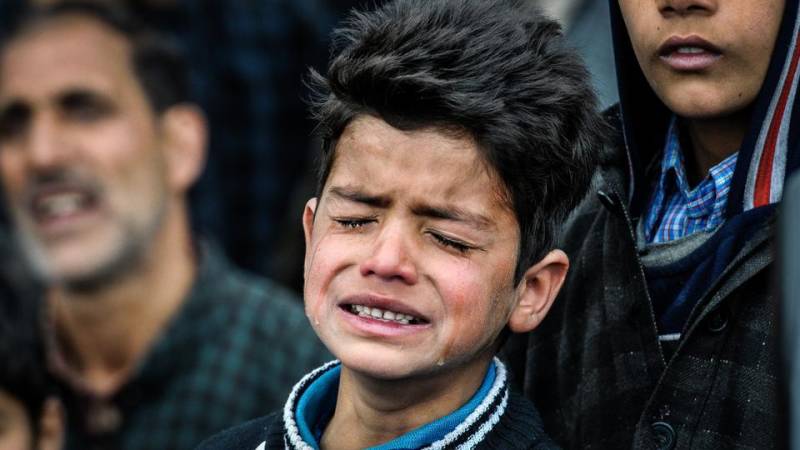 SRINAGAR - A heart-wrenching photo of a Kashmiri boy drenched in sadness and despair is taking the Internet by storm giving a clue of how tough life is in the restive region.

The photograph shows nine-year-old Burhan at the funeral of his friend Aamir who was shot dead by Indian forces in an encounter in Padgampora of Pulwama in south Kashmir.

Amir was killed as he joined scores of other locals who rushed to an encounter site in bid to help their freedom fighters escape the scene amid skirmish with Indian forces.

But to everyone's dismay, Amir who was a student of class 9 was gunned down as a bullet hit him in the neck.

Thousands, including Burhan, attended the funeral in his Begumbagh village, some four kilometres from the site of the gun battle where he was felled but the most melting moment was when the innocent Burhan was captured with tears rolling down his cheeks.

'Amir was like my brother. Who will I play with now,' Burhan asked in a sobbing tone.

The photograph is the latest entry in a series of tragic moments, starting with that of Syrian kid Aylan's dead body picture, and recently including a young man seeking to block the advance of tanks in China’s Tiananmen Square.

National Conference spokesperson Junaid Azim Mattu also took to Twitter and demanded to know what was being done to prevent pain and misery.

It's a heartbreaking picture by @javeddar786. Should make us pause and think - are we all doing enough to prevent this pain and misery. https://t.co/yQDCGTtJxz

Indian oppression in Kashmir Valley is going on after the killing of fighter Burhan Wani. Widespread protests erupted after the incident in which over 90 people were killed.

The international community has advised India to stay resilient and to avoid force but Indian forces are paying no heed to international standards of human rights.