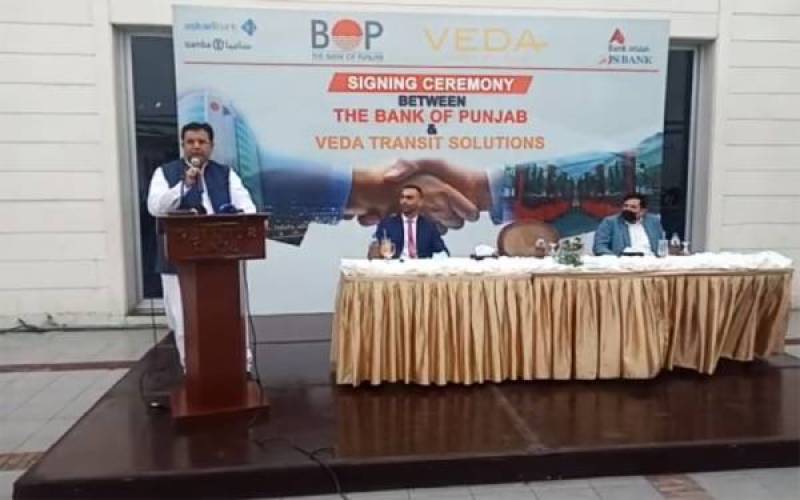 LAHORE – VEDA Transit Solutions (Pvt.) Limited has signed the financing agreement for a Rs2.60 billion term loan from a syndicate of banks led by the Bank of Punjab as Mandated Lead Advisor & Arranger to purchase 64 articulated buses for Lahore Metro Bus Project.

Director VEDA Muhammad Ammar Khan and Head of Investment Bank of Punjab Rizwan Hameed signed the financing agreement in the presence of the Chief Guest Provincial Minister for Transport, Government of Punjab Jehanzeb Khan Khichi at a ceremony held in Lahore.

Addressing the event, the provincial minister expressed his firm belief that Punjab Government will take every step to ease the difficulties of general public especially in the provision of public transport service.

Lahore Metro Bus is a vital infrastructure project of the city and over time it has turned out to be the backbone of the transportation network of the city. The project has not only provided affordable and reliable mass transit to the city residents but has also eased traffic congestion and resulting in reducing the pollution.

Veda commenced its operations in 2017, initially as a joint venture between Raaziq Group, Transit Associated and Pakistan Catalyst Fund (JS Bank + USAID) for operating Multan Metro Bus Feeder Project. Over the years, Veda has gained expertise of operating metro buses and will now be managing Lahore Metro Bus Service for next 8 years.

As a local national company, Veda aims to continue contributing to the economy as the project is expected to create more than 500 permanent jobs for the local community. The project is expected to create overall savings of Rs2 Billion resulting from improved costing and foreign exchange variation, which will be reinvested into country's economy resulting into more prosperity.

It is also expected to pave way to develop similar projects in future for the masses reducing air pollution challenges surrounding the country.

In the end, Director VEDA Muhammad Ammar Khan and Head of Investment Bank of Punjab thanked the participants for giving their precious time. Senior officials of Punjab Masstransit Authority were also present on this event.