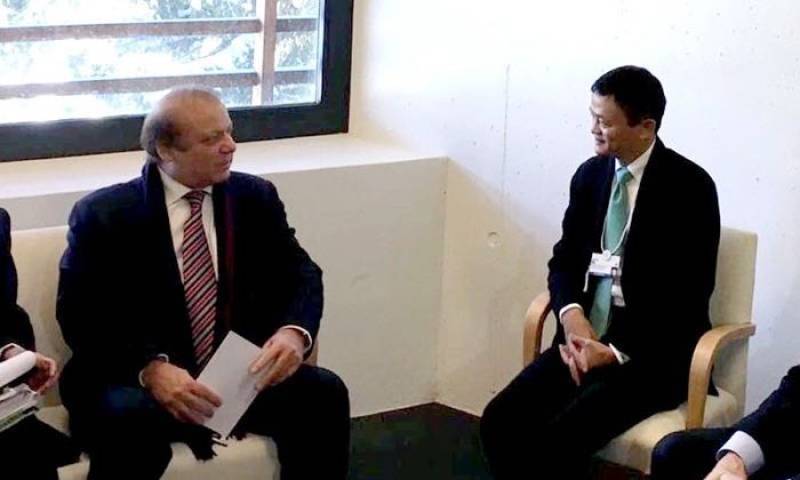 The Executive Chairman of Ali Baba, Jack Ma, welcomed the premier at the headquarters of the company after which the premier was given a detailed presentation on the company’s achievements and future planning.

Nawaz Sharif lauded the performance of the company and appreciated the efforts of its founder Jack Ma. He also recalled his meeting with Jack at Davos in January.

In his address, the prime minister said that Pakistan was a growing economy and the government was taking all efforts for the prosperity of the people, adding that since 2013 Pakistan’s economic conditions had improved.

“Our purpose is to empower people and strengthen the economy of Pakistan,” he remarked and added that he appreciated Alibaba not only for being an e-commerce success but for creating job opportunists for the masses.

Jack Ma said that that the company had a consumer base of around two billion, besides providing jobs to 100 million people.

The executive also informed the PM that Alibaba’s micro financing business has a recovery ratio of around 99 percent.

"The company delivered 60 million packages across China every day and had a record of delivering products to the toughest locations around the world, including Mount Everest," claimed Jack Ma.

Later, a Memorandum of Understanding (MoU) was signed between Pakistan and the Alibaba Group. Federal Minister for Commerce Khurram Dastagir inked the MoU from Pakistan’s side, while the PM was a witness to the ceremony.

The Prime Minister was quoted as saying “I am honoured to have had the opportunity to visit the Alibaba Headquarters in Hangzhou, China. Today by entering into this agreement with Alibaba and Ant Financial we further strengthen mutual cooperation and look to bring about a positive change for our small and medium enterprises. With the support of the Alibaba Group and Ant Financial, we hope to elevate our local businesses to new heights and bring them into the realm of the e-commerce platform.”