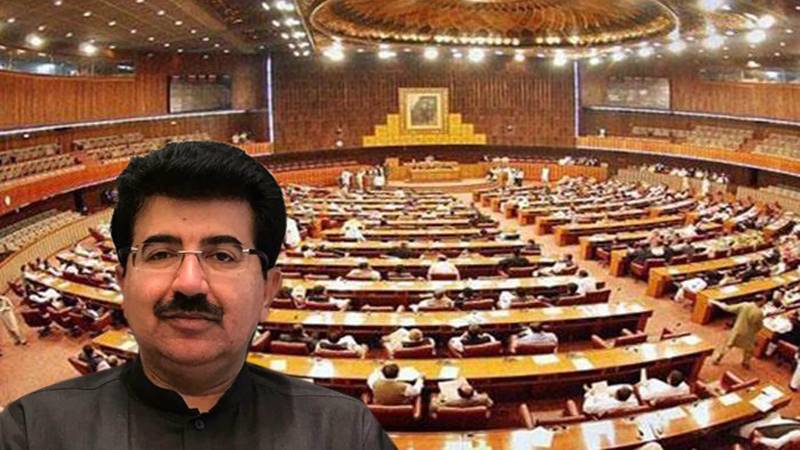 ISLAMABAD - The federal cabinet has expressed annoyance over Senate Chairman Sadiq Sanjrani's ruling to impose a ban on Information Minister Fawad Chaudhry for not tendering apology over his outburst against opposition leaders.

This was stated by the information minister while briefing the reporters about the cabinet meeting chaired by Prime Minister Imran Khan.

On Thursday Sanjrani issued a ruling stating, “Until he apologises, I impose a ban on his [information minister] entry in the remaining sittings of the current session under rule 13(4) read with rule 264”.

In a heated exchange of words, Chaudhry on Wednesday called for establishing a committee to ascertain use of funds amounting to trillion of rupees by the previous governments.

The opposition leaders terming the speech of the information minister as a breach of the House privilege boycotted the session and demanded an apology from him.

Talking to media on Thursday after cabinet meeting, Chaudhry quoted Prime Minister Imran Khan as saying: "No one will be allowed to humiliate the ministers".

“We will also have to formulate a strategy if the chairman Senate unable to bring the House in order,” he said.

Standing his ground on the issue, the information minister said that there was no need to apologise as the PML-N leaders also used offensive language against him and the prime minister.

"Should we tender apology for asking where the billions of rupees of the poor people of Pakistan were spent? he questioned.

Chaudhry further said the prime minister had assigned a task to Defence Minister Pervez Khatak for amicably resolve the issue with Sanjrani.

The defence minister later called on the Senate chairman and exchanged view on holding the proceedings of the upper house of the parliament with a spirit of conciliation.

A press release regarding the meeting said that the defence minister assured the Senate chairman of his cooperation.

“Supremacy of parliament and promotion of democratic attitudes is prime responsibility of all. The prime minister’s role for supremacy of the parliament is appreciable”, it quoted Mr Sanjrani as saying.