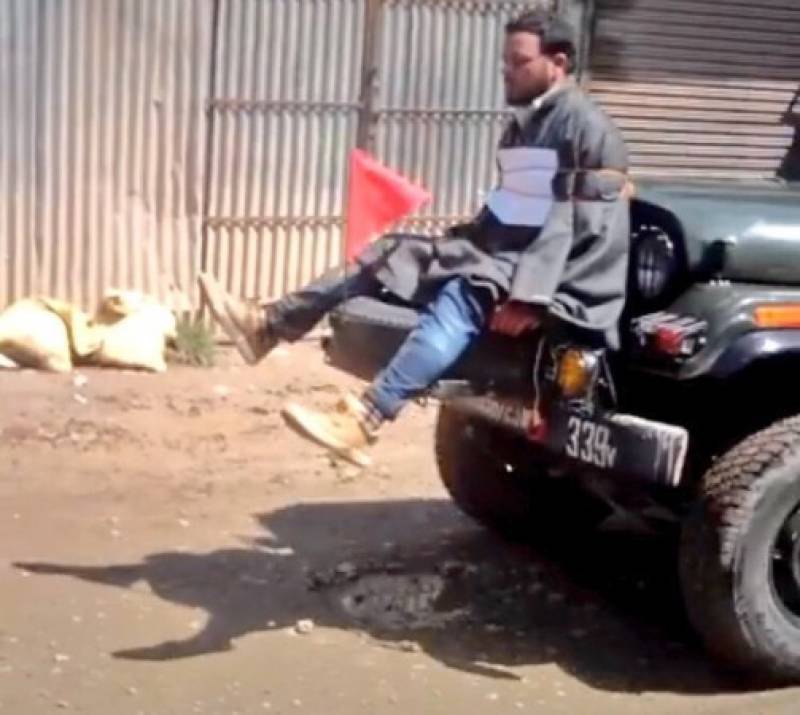 SRINAGAR - The Jammu and Kashmir police filed an FIR against the Indian Army days after a video showing a Kashmiri youth tied to a jeep as human shield sparked outrage.

The first information report (FIR) has been filed in the Beerwa police station in Budgam district where the horrific incident took place that exposed the true face of Indian version of democracy.

Chief Minister Mehbooba Mufti wrote on her official Facebook page, “In the ‘human shield’ video case FIR No 38/17 U/S 342/149/506&367 RPC has been registered in Police Station Beerwah on 13/4/17 . Investigation is being conducted by SDPO Magam'

The man strapped to the jeep in the video was identified as 26-year-old Farooq Ahmad Dar, who on April 9 showed up outside a polling booth in Arizal’s Chill Bras area, defying a separatist boycott call.

Former J-K chief minister Omar Abdullah had tweeted the video on Friday saying, "Here's the video as well. A warning can be heard saying stone pelters will meet this fate. This requires an urgent inquiry & follow up NOW!!"

Here's the video as well. A warning can be heard saying stone pelters will meet this fate. This requires an urgent inquiry & follow up NOW!! pic.twitter.com/qj1rnCVazn

Dar claimed that he never pelted stones at security forces. Detailing the incident, he said that he was pulled from his motorcycle by army personnel, tied to the front of the vehicle and driven around from village to village for hours.

'I was tied to the front of the jeep. On my chest, a white paper was tucked under the rope. I could only see my name written on it,' Dar said, further adding that 'On the way, soldiers were shouting to people, ‘come throw stones at one of your own’. People were running away. They were scared. I was told not to utter a word to anyone or they would shoot me.'

Following outrage over the video, the army ordered an inquiry.