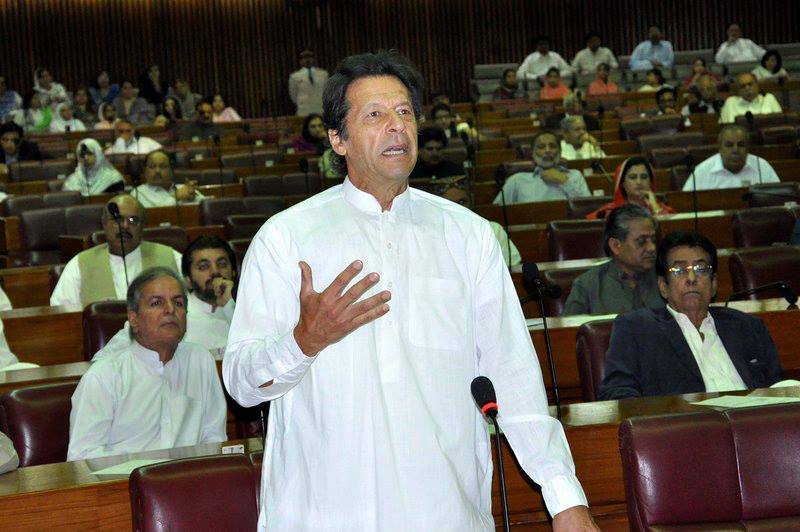 In his inaugural address as a Chief Executive of the country, Imran Khan expressed that he would respond to the queries inside the assembly twice a month.

Khan also highlighted that he was not backed by any military dictator and had secured victory on his own.

He outlined that he had struggled the most amongst the politicians, however, mentioned that only Quaid-e-Azam made such a struggle.

'I did not climb on any dictator's shoulders; I reached this place after struggling for 22 years. Only one leader struggled more than me and that was my hero, Jinnah,' asserted the newly elected premier.

Imran Khan expressed that the people of Pakistan have waited for 70 years for this change to unfold.

When Khan was addressing the assembly, members from the opposition benches kept sloganeering 'vote ko izzat do' and tried their best to disrupt the speech, however, Khan continued his speech flanked by the party loyalists.

The 65-year-old premier expressed that no matter what, he would not be blackmailed by the protest of the opposition.

Regarding the much-debated rigging allegations, Khan expressed that those having reservations should move to the election commission of Pakistan or the Supreme Court.

He thanked the youth of the country and announced that he would strive hard to create employment opportunities for them.

The newly elected premier also mocked the opposition and challenged PML-N and JUI-F leader Maulana Fazlur Rehman to stage a sit-in at D-chowk, even for a month.

'We will facilitate you with a container if you want to do a sit-in', offered Imran Khan but added that there would be no National Reconciliation Ordinance (NRO).