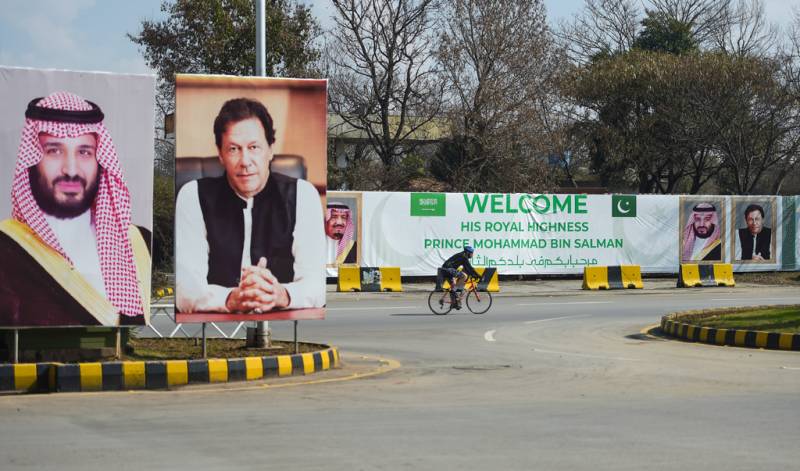 ISLAMABAD - Describing the visit of Saudi Crown Prince Muhammad Bin Salman to Pakistan as a manifestation of the strength of their relationship, Prime Minister Imran Khan has stated that it would go a long way in laying a foundation of strategic and economic relations that has been the hallmark of two brotherly countries.

“The generous deposit of $3 billion and supply of oil on deferred payment is reflective of the desire of the Kingdom to see a strong, vibrant and prosperous Pakistan,” he said in an interview published in the Saudi Gazette on Sunday.

The prime minister said as the longstanding, firm and close relationship between Pakistan and Saudi Arabia extended to all spheres; political, economic, and diplomatic, the Crown Prince’s visit would strengthen the diplomatic support of Saudi Arabia to Pakistan and would reinforce relations.

He was confident that the economic relations of the two countries would be further expanded by identifying new avenues of investment and as well as joint ventures between the two countries. “It would further our mutual trust and strong historical relations.”

The prime minister said during the visit, the Crown Prince would also interact with key senior government officials of Pakistan, besides himself, and would get to know Pakistan and its government better.

“Pakistan is eagerly looking forward to this historic visit of Crown Prince Muhammad Bin Salman to Pakistan,” he added.

To a question, the prime minister said during the visit all aspects of bilateral, regional and global issues, ranging from bilateral cooperation in the economic, diplomatic, political arenas to collaboration in regional peace and stability, especially of relevance to the Muslim Ummah would be discussed.

“Pakistan is a highly attractive investment destination for Saudi Arabia. So the possibilities of Saudi investment in sectors like energy, petroleum, and agriculture and infrastructure development will come under discussion,” he added.

In the diplomatic sphere, the prime minister said the two nations could join hands to effectively mobilize the international community for amicable resolution of festering disputes such as Kashmir and Palestine.

The prime minister said for the strengthening of Muslim Ummah and close cooperation among Muslim countries, Pakistan and Saudi Arabia could effectively utilize the platform of Organization of Islamic Cooperation (OIC).

To a question about Saudi Arabia’s decision to establish an oil refinery in Gwadar, the prime minister said Saudi Arabia as one of the leading producers of oil had tremendous experience in the energy market, which could benefit Pakistan in its quest for developing much-needed resources of energy.

“The investment in Gwadar alone would be the most important contributor towards making Pakistan self-reliant in this sector,” he added.

The prime minister said Pakistan would like to develop an economic and cultural corridor with Saudi Arabia to further expand the bilateral relations.

“Our relations with Saudi Arabia are not based on the exigencies of time but are time-tested,” he said. “We hope that Saudi Arabia would invest in other sectors as well to bring the economic and trade relations at par with our political relations.”

The prime minister said Pakistan would like to increase its agricultural exports not only to Saudi Arabia but also to other regional countries, given the range, fertility and productivity of Pakistan’s agricultural sector.

“Pakistan looks forward to enhanced cooperation in the banking sector, education sector, science and technology, trade and investment, construction sector and cultural cooperation especially, in the field of films and cinemas, and tourism. On KSA becoming a member of CPEC, it will bolster CPEC as an engine of growth for the region,” he maintained.

To another query, the prime minister said CPEC would not just be a corridor, as was indicated by his government’s focus on the next phase of CPEC where they were going to focus on the Special Economic Zones. “We will focus on the indigenous production and industrialization.”

He said the government had initiated a broader and multi-dimensional reforms process to improve the investment climate in Pakistan and to make it an attractive destination for potential investors.

“This will complement the projects initiated under CPEC. The main thrust, among other factors, is to promote enabling the environment for business and commercial activities in the country,” he added.

The prime minister said their priority was to make Pakistan easier for business and friendly for tourism. In that regard, the government was focusing on automation in each sector to reduce the cost, time and administrative procedures/bottlenecks to facilitate the investors, he added.

The government, he said, was also encouraging the relocation of industry not only from China but also from other countries. It was focusing on measures aimed at restoring the confidence of both local and foreign businessmen in Pakistan, he added.

“We make no differentiation between local and foreign investors. Foreign investors can have full ownership as well as repatriate their capital or profit without any hindrance. All of this would help boost economic productivity and will make CPEC not just a corridor but also the engine of economic growth, prosperity, trade cooperation and investment.”

To another question, the prime minister said the Saudi oil refinery planned in Gwadar would help boost local production and local energy market. The exchange of skills and transfer of technology and best practices would enhance competition and increase the productivity of our local refineries, he added.

“It would also complement the projects under the CPEC. This, of course, is just the beginning of our cooperation and we would like to build upon the successes of this project to further expand cooperation in other areas as well,” he added.

To a question, the prime minister said multiple contracts were expected to be signed between Pakistan and Saudi Arabia during the visit of Crown Prince Muhammad Bin Salman.

“The main highlight of the visit will be the signing of the MoU (Memorandum of Understanding) in respect of the oil refinery, which is Saudi Arabia’s largest investment in Pakistan’s history,” he added.

The prime minister said it would be ensured that investment of Saudi investors, including the oil refinery project, did not face any procedural delays. “We will put in place an investment-friendly environment as has been indicated in World Bank’s ‘Doing Business Index’ where Pakistan has improved its score from previous years.”

He said Pakistan offered a bundle of investment opportunities to the world, through its vast untapped resources and a shortest gateway to Central Asian countries via the CPEC, adding, Saudi investments reflected the Kingdom’s diversification program envisioned in its Vision 2030.

“We expect Saudi Arabia to invest in petrochemical industries, solar-powered electricity projects and mining sector. Keeping in view, the proximity of Gwadar Port to the Middle East and its regional geo-strategic position, there are huge potentials for the countries of the region to reap economic benefits,” he added.

To a question about terrorism, the prime minister said terrorism was a big menace that had to be countered with an iron hand. “Being the biggest victim of terrorism, Pakistan knows its ugliness and costs more than any other country in the world.”

He recalled that after withdrawal of the Soviet Union from Afghanistan, and the loss of interest by the US in the region, Pakistan was left to deal with that mess, and for the next decade, Pakistan was plagued by that menace.

“We are determined not to become a partner in any proxy war anywhere in the world. Rather we will be a partner in peace. Islamabad believes that extremism in most parts of the world, which leads to terrorism, is brought about by many factors,” he added.

The prime minister said that Pakistan was against interference of regional powers in the internal affairs of any country.

He said Saudi Arabia had enormously contributed to the uplift of its own people as well as other Muslim countries, and that needed to be appreciated and discouraged. The Islamic Military Alliance against terrorism or IMCTC was a pioneering initiative of Saudi Arabia and the Muslim world to protect Muslim countries from growing security and terrorism threats, he added.

“It is imperative that regional platforms like IMCTC work for the collective good of nations by countering evils of terrorism and instability that threatens the very social fabric of our societies. Islamic Military Alliance works for the stability of its member countries by helping sustain the political stability of the region.

“The notion created by some that IMCTC is a coalition of vested interests against a particular country, region or sect, is a rustic mockery and far from any logic and reality. We hope this alliance will evolve into an alliance of all Muslim states to collectively fight the common menace of terrorism,” he added.

To another question, the prime minister said Pakistan rejected military solutions and believed that every conflict had a political solution and the conflicts could be resolved through peaceful means.

“Saudi Arabia is very close to our heart in every respect. It is only natural that Pakistan would always like to see it prosper in the most peaceful environment within and around its boundaries. We have always said if the Holy Cities of Islam are threatened, Pakistan would go all out to defend the Holy Cities,” he stressed.

In response to another question, the prime minister said it was Pakistan’s stated position that it would not allow anyone to attack Saudi Arabia. “Pakistan will always stand with Saudi Arabia whenever it faces a threat in any form to its security and sovereignty. We want Saudi Arabia as safe and secure as we want Pakistan to be”, he maintained

About Pakistani community in Saudi Arabia, the prime minister said as Saudi Arabia was home to more than two million Pakistanis, he would urge all of them to take it as their second home in the true sense of the word.

“They must fully contribute their energies to the development of this second home. I would also urge them to play their role in strengthening our brotherly relations at whatever level they are working,” he added.