COAS Gen Bajwa has the right to comment on economy, says PM Abbasi 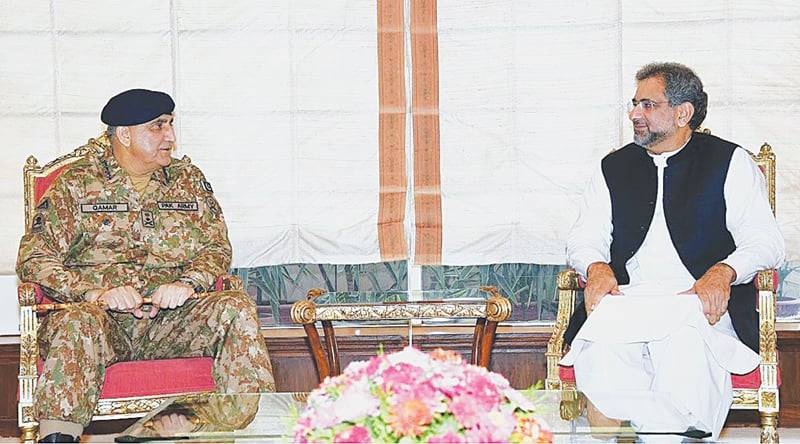 ISLAMABAD - Prime Minister Shahid Khaqan Abbasi has clarified that a military chief has the right to discuss or comment on the economic condition of the country.

In an interview to private television, the premier highlighted different facets of civil-military balance and claimed that there was no tension in the relationship between the two institutions.

'The army chief has expressed his opinion. He went to address an economic forum, everyone does that," the PM maintained.

Showing agreement with the military chief, Abbasi continued that all the decisions must be taken by the Parliament and according to the Constitution adding that if democracy is attacked, the country would suffer.

The prime minister went on to declare that the economic indicators were very transparent while quoting an international magazine.

'World Bank's report is not too favourable but The Economist has placed Pakistan in the world's five growing economies' added the PM.

It is relevant to mention that the issue of economy became a bone of contention between the civil-military corridors when during last week, Army Chief Gen Qamar Javed Bajwa said that the army was keenly watching developments in the country’s economy and shares some of the apprehensions being voiced about it.

“Growth has picked up but the debts are sky high. [The situation regarding] infrastructure and energy have improved considerably but the current account balance is not in our favour,” the army chief said while addressing a gathering organised by Pakistan Chambers of Commerce and Industry in Karachi.

Moreover, ISPR chief Asif Ghafoor later said that the country's economic health, "if not worse, was not good either".

The comments of ISPR official perturbed Interior Minister Ahsan Iqbal who urged Ghafoor to refrain from making comments on the national economy.

“Such irresponsible statements can dent Pakistan’s global image,” the minister had said.

Iqbal's criticism led to another press conference in which the DG ISPR expressed his disappointment for the remarks passed by interior minister.

'I was disappointed as a soldier and a citizen of Pakistan at the interior minister's reprimand for commenting on economic matters,' Asif Ghaffor had said on Sunday.

Following the briefing, Ahsan Iqbal expressed that the disappointments must be converted to hope, thus trying to maintain normalcy between the civil-military leaders.