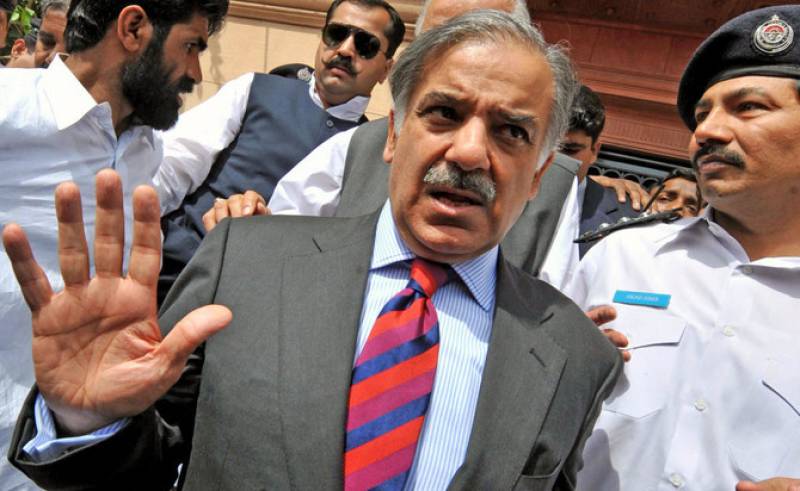 ISLAMABAD - Opposition Leader in the National Assembly, Shehbaz Sharif on Wednesday alleged that the National Accountability Bureau (NAB) chairman had planned his arrest ahead of the General Elections.

Speaking on the assembly's floor, the younger Sharif expressed that his arrest was planned between July 6 and 13th, however, the plan was not executed at that time.

'There is an unholy alliance between Pakistan Tehreek-e-Insaf and National Accountability Bureau,' the former Punjab chief minister stressed in his address to the lower house of the Parliament.

He expressed that on May 13th, the cases regarding terrorism were lodged against Pakistan Muslim League Nawaz members.

The president of Pakistan Muslim League Nawaz (PML-N), who was relocated to Islamabad after the issuance of production orders by Speaker Asad Qaiser, continued that efforts were done to seek favourable results in the elections.

'Either the results of General Elections were not factual or the outcome of by-elections was incorrect,' said the Leader of the Opposition.

The politician expressed that the core motive behind his arrest was to influence the results of the by-elections, however, hastened to add that a politician could brave anything.

'Prime Minister Imran Khan is the product of electoral rigging. It has been proven that the 2018 General Election was rigged,' the leader of the opposition in NA expressed.

Regarding the ongoing probe against him by the anti-corruption body, Sharif expressed that an official named Aftab inquired him about the Ashiana scam wondering about the 50 people regarding whom the premier talked about 'arresting' in his speech.

'I met Kamra Kiyani, the brother of former Chief of the Army Staff, General Ashfaq Pervez Kiyani, for the first time in 2008,' said the politician.

He continued that a meeting was arranged with then military chief Ashfaq Pervez Kiyani, where he complained about the slow pace of work at a project acquired by his brother Kamran Kiyani.

A NAB official told me that there were no corruption allegations against him in the housing case, but that he used his position to give the contract to former army chief General (retd) Ashfaq Parvez Kayani's brother to please him, said the politician.

Shehbaz Sharif expressed that he cancelled the contract awarded to Kamran Kiyani, without any complaint by Ashfaq Kiyani.

'Ashfaq Kiyani informed me that I was authoritative enough to cancel the contract,' said the lawmaker.

The PML-N chief expressed that even the contract regarding Ashiana-i-Iqbal worth Rs 1.5 billion was not awarded to Kamran Kiyani adding that NAB inquired him about not taking any action on a report compiled by Tariq Bajwa.

'The government run by Pervez Elahi had awarded the Ashiana project to Kamran Kiyani,' clarified the lawmaker.

'Is this the National Accountability Bureau or National Blackmailing Bureau,' wondered the former chief minister.

'I have made mistakes but gave my blood and sweat for governance in Punjab,' said Shehbaz, his voice catching with emotions.

Sharif expressed that as a public representative, Pakistani and a humble political worker, he wanted to tell you [NA Speaker] that he had done nothing except serving the people honestly.

'I was alleged by Imran Khan of having assets in China and NAB is repeating the same claims now,' decried Shehbaz Sharif.

Shehbaz Sharif claimed that he was asked whether he would become an approver against former foreign minister Khawaja Asif or not.

'I asked the NAB officials whether I was summoned for investigation or becoming an approver against someone,' said Sharif and added that he would quit politics if credible evidence is presented by NAB.

The members from the opposition and treasury benches kept on engaging with each other as the Pakistan Muslim League Nawaz president was delivering his comments before the house for the first time after arrest by the National Accountability Bureau (NAB).

A two-member team of the anti-corruption body is accompanying the politician who headed to Islamabad on PIA's PK-652 flight; the younger Sharif, who is also the Opposition Leader in the National Assembly, headed to his chamber from where he proceeded to the assembly hall.

The sergeants-at-arms would keep an eye on the politician, who would be taken into NAB's custody after the session; Speaker National Assembly, Asad Qaiser had issued the production orders for Shehbaz Sharif after his predecessor along with PML-N members called on him and stressed the need for calling a session of the Lower House of the parliament.

The members of PML-N are expected to stage a heavy protest on the floor of the house against the arrest of Shehbaz Sharif in the Ashiana-i-Iqbal housing scam.

A day earlier, the politician was remanded into the custody of NAB for 14 days which is investigating into the housing scam worth Rs 14 billion.