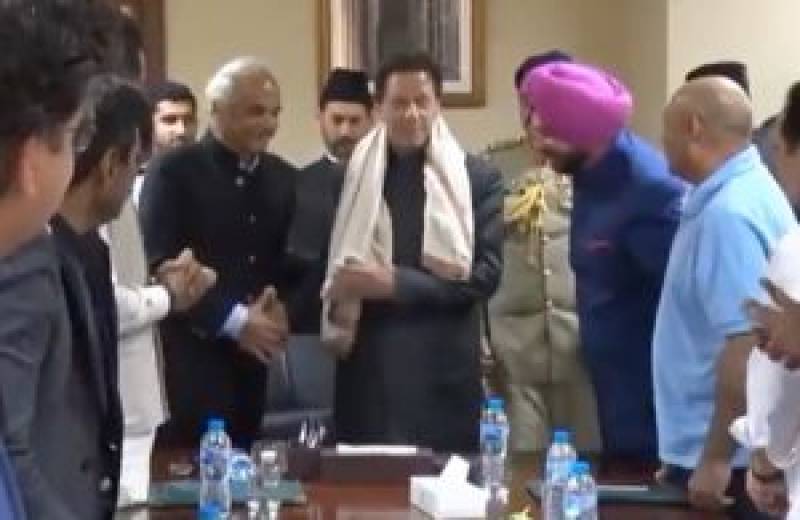 Sidhu shook hands and hugged the newly-elected 22nd PM of Pakistan before gifting him a shawl. Several other friends of Khan from the cricketing world also joined the meeting.

PM Imran Khan surrounded by well wishers today; an iconic moment as he meets the comrades and competition he played with in his cricketing days and who have never had any doubts in his ability to lead & make teams work together.@sherryontopp @waqyounis99#PrimeMinisterIK pic.twitter.com/RRfpJxcldx

Wasim Akram, Waqar Younis, Rameez Raja, Mushtaq Ahmed, and Abdul Qadir were among those who were present at the occasion.

Sidhu arrived in Pakistan on Friday to attend the oath-taking ceremony of PM Imran Khan. He arrived in Lahore from Wagah Border from where he left for Islamabad to meet Imran Khan.

Meanwhile, the Bharatiya Janata Party (BJP) on Saturday launched a scathing attack on the Congress party over its party leader Navjot Singh Sidhu's Pakistan visit and said that his visit was "no less than a crime".

Addressing a press briefing, BJP national spokesperson Sambit Patra said, "It is no less than a crime that a Congress member and cabinet minister in Punjab government went to Pakistan for the swearing-in ceremony of Prime Minister Imran Khan and acted in a certain way."