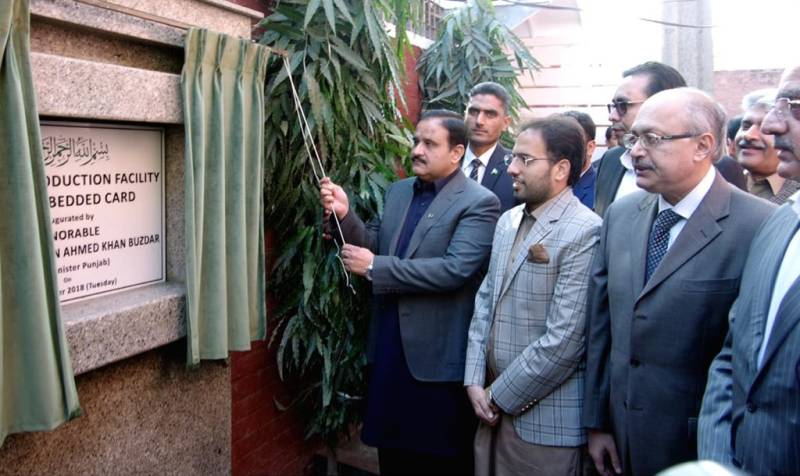 After the inauguration, he visited the central control room and inspected issuance of smart cards to the general public. He was also given a briefing about the programme.

Later, talking to the media, the chief minister said that process of motor vehicles registration has entered a new phase. Now, the vehicle owners would be issued smart cards instead of registration books and this would eliminate the chances of forgery and theft of vehicles, he added.

People would also get rid of registration book as detailed data of the vehicle as well as the owner would be stored in the NFC chip of the smart card which would be provided to people in a short span of time, he said and added that the Excise & Taxation Department has the capacity to issue 20,000 to 30,000 smart registration cards everyday while 7,000 to 8,000 registration cards were being issued currently, he added.

Usman Buzdar said that the smart card scheme was started to facilitate people and a mechanism has also been designed for its timely dispatch to the people concerned, he added.

The card would be issued within 48 hours after payment of required fee of new registration or the card in any district of the province, he elaborated. This card would be sent to the owner of the vehicle through a courier service, he added.

The chief minister said that registration card was issued in Islamabad within one month against a sum of Rs1,500 while Rs695 were received in Sindh. An improved card having multi-features would be issued in Punjab through courier service in just Rs 520 and this system will also be extended to every district, he added.

To a question, he said that inquiry would be held about an audio-tape with regard to a hospital of Rawalpindi district and assured that nothing illegal would be done. Everything would be done in accordance with the law, he said and added that an impartial investigation would be held, he added.

To another question, he said that he has taken notice of increase in prices of LPG in Punjab and its artificial shortage and also issued instructions to the Chief Secretary in this regard.