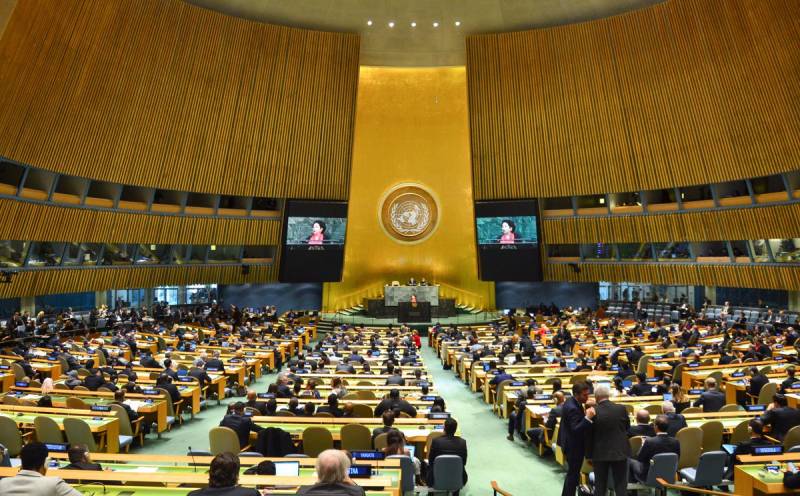 UNITED NATIONS – The United Nations General Assembly (UNGA) on Monday unanimously passed a Pakistan-sponsored resolution reaffirming people’s right to self-determination and calling on countries to immediately cease their foreign military intervention in and occupation of foreign countries and territories, as well as acts of repression, discrimination and maltreatment.

The resolution, co-sponsored by a record number of 83 countries, was recommended by the 193-member assembly’s Third Committee, which deals with social, humanitarian and cultural issues.

“The resolution reaffirms the inviolability of the right to self-determination for all peoples without exception, including, of course, the people of occupied Jammu and Kashmir and Palestine,” Pakistan’s Ambassador to the UN, Dr Maleeha Lodhi, who is currently in Islamabad, said in a phone interview with APP.

The resolution moved by Pakistan on the universal right of people to self determination was adopted by consensus in the UN General Assembly today. The Third Committee had earlier recommended this to the GA. pic.twitter.com/i9TbQJQnDW

Under the terms of the text, the General Assembly reaffirmed the universal realisation of the rights of all peoples, including those under colonial, foreign and alien domination, to self-determination as a fundamental condition for the effective guarantee and observance of human rights.

“Pakistan has historically been a proud champion of self-determination,” Ambassador Lodhi said.

Adoption by the UN General Assembly of the resolution tabled by Pakistan reaffirms the inviolability of the right to self-determination for all peoples without exception, including, of course, the people of occupied Jammu and Kashmir and Palestine. pic.twitter.com/z5c6mw9jP5

“Our support for the right of people to self-determination against alien domination and foreign occupation remains undiminished.”

The resolution declared the General Assembly’s firm opposition to acts of foreign military intervention, aggression and occupation, since these have resulted in suppression of the right of people to self-determination and other human rights in certain parts of the world.

The assembly deplored the plight of millions of refugees and displaced persons who have been uprooted as a result of these acts and reaffirmed their right to return to their homes voluntarily with safety and honour.

It also requested the human rights council to give special attention to the violation of human rights, especially the right to self-determination, resulting from foreign military intervention, aggression or occupation.

It also requested the secretary-general to report to the next session of the General Assembly on this question.–Agencies