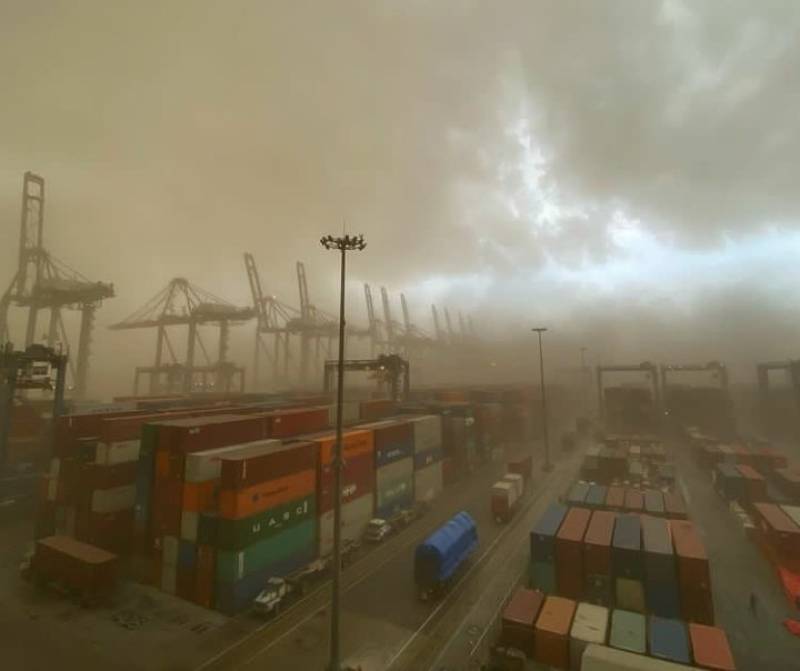 Caption: A view of the Karachi port during the dust storm on Tuesday evening.

The largest city of Pakistan remained in the grip of a severe heat spell for two days and then gusty winds flew objects around and dark clouds covered parts of the metropolis on Tuesday evening. Soon after the weather conditions changed, power outages were reported in some areas.

Parts of lower Sindh, including Karachi, have been under the influence of cyclonic storm Tauktae after mercury rose to 43.5 degrees Celsius in Karachi on Monday.

#Karachi in the midst of a severe dust storm due to #CycloneTauktae.

According to the meteorological department, the dust storm was caused by the influence of the cyclone system in southern Pakistan's vicinity combined with the local weather conditions. Karachi could experience gusty winds again until the cyclone system subsides.

As the strong winds caused roofs to collapse in some areas, a man and a woman were killed in Dabba Colony, a nine-year-old child in Shershah and a man in Baldia No. 14, says Karachi Police.

"A few dust/thunderstorm-rain [spells] accompanied with gusty winds of 30-50km/h may occur in Tharparkar and Umerkot districts during next 12 hours," the alert said, adding that hot and dry weather would continue on Tuesday in Karachi, Hyderabad, Shaheed Benazirabad, Badin and Mirpurkhas districts.

Covid19 was more than enough, we don’t need #CycloneTauktae.

At least 24 people were killed and over 100 went missing in India after Cyclone Tauktae slammed into western parts of the country on Monday evening, compounding woes of the nation battling a devastating coronavirus surge.