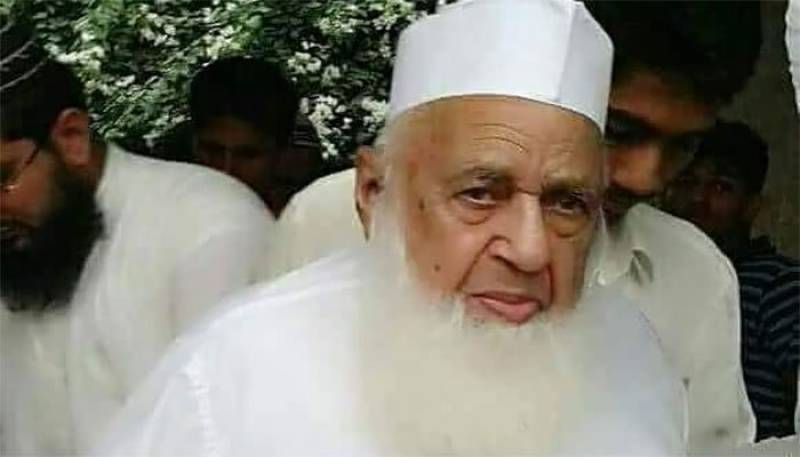 LAHORE - Tableeghi Jamaat Ameer Haji Abdul Wahab passed away at the age of 95 after a prolonged battle with dengue on Sunday morning.

He had been under treatment at a private hospital in Lahore. His funeral prayers were offered after Maghrib prayers at Raiwind Ijtema Haveli, and later he was laid to rest in a graveyard adjacent to the TJ centre in Raiwind.

Maulana Nazarur Rehman led the funeral prayer, which was attended by a large number of devotees, clerics, members of the TJ council and people belonging to all walks of life.

He was born on January 1, 1923, in New Delhi, and completed his graduation from Islamia College Lahore.

He was the third chief of Tableeghi Jamaat. He was working as a district officer in British India when he joined the Tableeghi Jamat in 1944.

President of Pakistan, Dr Arif Alvi expressed his heartfelt condolences on Wahab's death, while praying for the departed soul.

I would like to express heartfelt condolences on the sad demise of Haji Abdul Wahab the Ameer of Tableeghi Jama'at. He spent his entire life spreading the message of Allah. May his soul rest in peace.

Prime Minister Imran Khan, in a tweet, expressed grief and sorrow over Haji Wahab's demise. He offered his condolences to the bereaved family, and said Haji Wahab's services as a religious scholar will always be remembered.

Prayers and condolences on the passing of Ameer Tableeghi Jamaat Haji Abdul Wahab. He made a major contribution in spreading the message of Islam and peace; and he leaves behind a vacuum which cannot be filled easily.

"Haji Abdul Wahab's contribution to religious affairs will always be remembered," he said.

He said Haji Abdul Wahab rendered innumerable services towards the preaching and spread of Islam's message. He recalled that the TJ leader always based his preaching on Islam's message of peace, and had proved through his conduct that sentiments of peace and love can bring lasting changes in the mindset and character of a person.

Various PML-N leaders, including Nawaz Sharif, Shehbaz Sharif, Hamza Shahbaz, Amir Muqam and Marriyum Aurangzeb offered their condolences to the family of the deceased and acknowledged the amir's contributions to religious affairs.

"His services in trying to spread Islam are irreplaceable," the JI chief added.