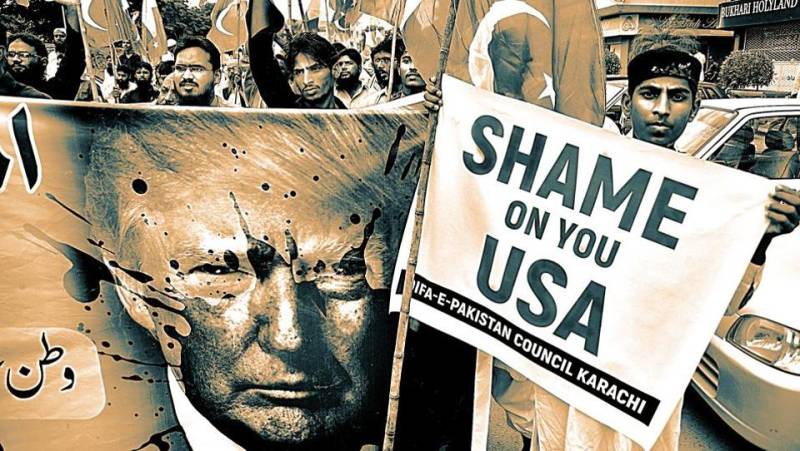 ISLAMABAD - Pakistan on Tuesday rejected what it called accusations made in the Trump administration’s first national security strategy, saying “unsubstantiated allegations” in the document trivialised Islamabad’s efforts to fight terrorism.

In the national security strategy, the US had said it would continue to press Pakistan to do more on counter-terrorism and be a “responsible steward” of its nuclear assets.

While unveiling the document on Monday, President Donald Trump said, “We have made clear to Pakistan that while we desire continued partnership, we must see decisive action against terrorist groups operating on their territory. And we make massive payments every year to Pakistan. They have to help.”

In a strongly-worded response, Pakistan’s foreign office said the US strategy document “has made certain unsubstantiated allegations towards Pakistan.”

“Pakistan rejects such unfounded accusations that belie facts on the ground and trivialise Pakistan’s efforts for fighting terrorism and our unmatched sacrifices to promote peace and stability in the region.”

“It is because of Pakistan’s cooperation with the international community, acknowledged and appreciated by the US leadership, that the Al- Qaeda core was decimated from the region,” the statement said.

It said Pakistan “continues to suffer at the hands of state-sponsored terrorism, funded and abetted by our neighbours through proxies.”

These proxies, consisting of individuals, organizations and intelligence agencies, are working against Pakistan at the behest of regional adversaries, the statement said.

The self-proclaimed guarantors of peace and phoney regional powers are pursuing this nefarious game of expansionism to the detriment of regional and global peace, it said, without specifically naming any country.

“Destabilising policies and actions by some countries to maintain their hegemony in pursuit of absolute power are responsible for instability in several parts of the world, including ours.”

Countries emerge as regional or global powers on the basis of their constructive contributions. It does not fall upon one country to bestow such status on any state, it said.

Referring to India, it said: “Ironically, a country with a record of defiance of UNSC resolutions, the introduction of nuclear weapons in South Asia and use of terrorism as a state policy is being projected as a regional leader. South Asia’s strategic stability is being undermined by India’s “brutalisation” of people of Kashmir and “incessant ceasefire violations targeting innocent civilians.”

It also said that the Afghan soil is being constantly used by elements hostile to Pakistan’s stability.

Pakistan’s efforts and sincere proposals for effective border management to prevent cross-border movement of militants and return of Afghan refugees are yet to make any headway.

“On the other hand, a malicious campaign is underway to undo Pakistan’s achievements in the war against terrorism,” it said.

“Thanks to these comprehensive operations, today, Pakistan is a more stable, peaceful and secure country. The success against the menace of terrorism, however, has come at a tremendous cost of blood and treasure, courageously braced by the people of Pakistan.”

It also responded to the US strategy’s reference to its nuclear arsenal.

“As a responsible nuclear state, Pakistan has put in place, a highly efficient, robust and centralised command and control mechanism to secure its nuclear assets. The safety and security standards of Pakistan’s nuclear arsenal are second to no other nuclear state.”

Pakistan, the statement said, “remains committed to continue its fight against the sympathisers, financers and abettors of terrorism to ensure that Pakistan’s soil is not used for committing violence anywhere.”

“We expect the same commitment from our neighbours and other regional and global actors,” it added.