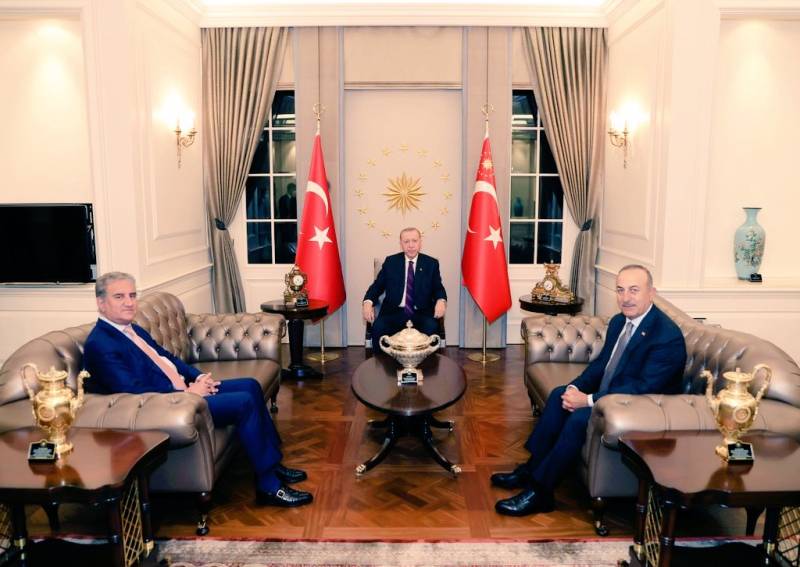 Qureshi, who is all set to attend the United Nations General-Assembly (UNGA) session on Thursday, held a meeting with his Turkish counterpart along with President Recep Tayyip Erdoğan at the Presidential Palace.

Privileged to call on H.E @RTErdogan. My PM @ImranKhanPTI looks forward to visiting 🇹🇷 this year to participate in the next session of the High-Level Strategic Cooperation Council. pic.twitter.com/1UjGJlGPLV

Both sides reaffirmed that the international community especially Muslim countries have a collective responsibility to ensure necessary steps to address the grave situation in Palestine.

A statement issued by the Foreign Office stated that Qureshi apprised Çavuşoğlu of the sentiment prevailing in Pakistan in support of the Palestinians including the resolution unanimously adopted by the National Assembly of Pakistan.

Pakistan also appreciated Turkey’s principled and steadfast stance on Indian Illegally Occupied Jammu and Kashmir issue. The two sides also discussed the ongoing preparations for the 7th Session of the High-Level Strategic Cooperation Council that will be held in Turkey this year, FO statement further added.

During the meeting with Turkish President Tayyip Erdoğan, Pakistan’s Foreign Minister also expressed gratitude to the Turkish premier for standing with Pakistan in the FATF. Prime Minister Imran Khan is also looking forward to visiting Turkey this year to participate in the next session of the High-Level Strategic Cooperation Council, Qureshi told Erdoğan.

🇵🇰 FM @SMQureshiPTI and FMs of 🇹🇷 , 🇵🇸 and other countries, will be traveling to @UN New York to participate in-person in a meeting of the #UNGA on the #Palestine issue.
🇵🇰🇺🇳🇵🇸#WeStandWithPalestine pic.twitter.com/Dut0MWRAP3

Qureshi, who is in Turkey on special instructions of Imran Khan, will leave for New York along with foreign ministers of Sudan, Palestine, and Turkey to participate in a meeting of the United Nations General Assembly (UNGA) on the Palestine crisis.