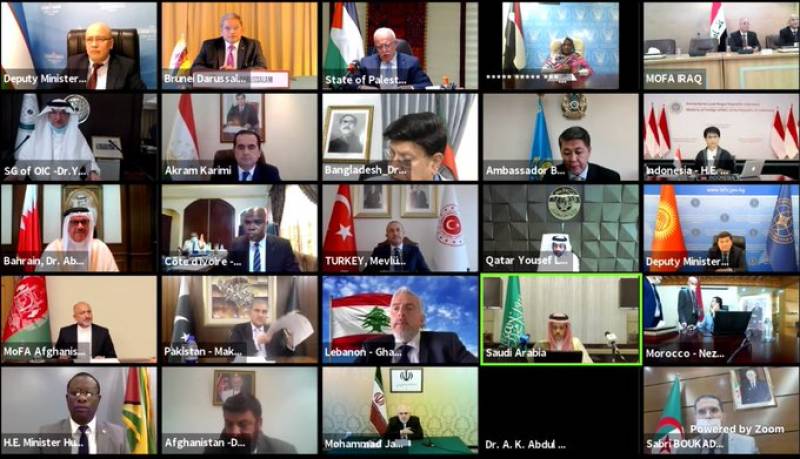 JEDDAH – The Organization of Islamic Cooperation (OIC) on Sunday condemned Israeli attacks on Palestinians and warned about the consequences of Israel’s deliberate inflammation of religious sensibilities and provocation of Palestinians and the Muslim world.

A resolution adopted by the OIC Executive Committee at the level of foreign ministers against the Israeli aggression in the Palestinian territories, in particular Al-Quds Al-Shareef, says: “[It] condemns in the strongest terms the barbaric attacks launched by Israel, the occupying authority, against the Palestinian people and their land and holy sites; demands complete and immediate stop of these attacks that have affected innocent civilians and their properties, in gross violation of international law and United Nations resolutions on the question of Palestine; and warns that the continuation of and incitement to these attacks and provocations, the threat on the lives of innocent civilians, causing severe suffering to them increase the risks of instability, with serious implications for security in and outside of the region.”

The resolution “warns, in particular, against the dangerous effects of Israel’s continued and deliberate inflammation and provocation of the religious sensibilities and feelings of the Palestinian people and the entire Islamic ummah with its heightened attacks on worshippers, especially starting from the beginning of Ramadan, blocking worshippers’ access to the holy sites to perform their religious rites, including Muslims’ access to the Al-Aqsa Mosque and Christians’ access to the Church of Holy Sepulchre during the Easter celebrations, violent storming of the Al-Aqsa Mosque/Al-Haram Al-Shareef by the occupation forces, terrorising and attacking peaceful worshippers, in flagrant violation of international humanitarian law”.

The OIC resolution “demands a stop to all violations being carried out by Israel, the occupying authority, including disrespect for the holy sites, in particular, the sacredness of the Al-Aqsa Mosque/Al-Haram Al-Shareef, and not to undermine their historical and legal status; reiterates that Israel is an occupation force and does not possess any legitimate right whatsoever on occupied Palestinian land, including East Jerusalem and the Al-Aqsa Mosque/Al-Haram Al-Shareef, and that all measures undermining its status are null and void and of no legal effect”.

At the emergency virtual meeting in Jeddah, OIC Secretary General Yousef bin Ahmad Al-Othaimeen said: “We salute the resilience of the Palestinian people in Al-Aqsa; Al-Quds is an integral part of Palestine.”

#OIC Secretary General: We salute the resilience of the Palestinian people in Al-Aqsa; Al-Quds is an integral part of #Palestine. #AlAqsaMosque pic.twitter.com/ERTym7elEY

As Israel continues to carry out airstrikes on Palestinians, at least 188 people, including 55 children, have been killed in seven days of the conflict, according to the Gaza Health Ministry. Another 1,230 Palestinians were wounded in the Israeli airstrikes.

On the other hand, a major Israeli newspaper reported that 10 people have been killed in Israel in rockets fired by the groups fighting against the Israeli occupation of Palestinian territories.

US President Joe Biden on Sunday reaffirmed his support for Israel’s right to defend itself and at the same time ...