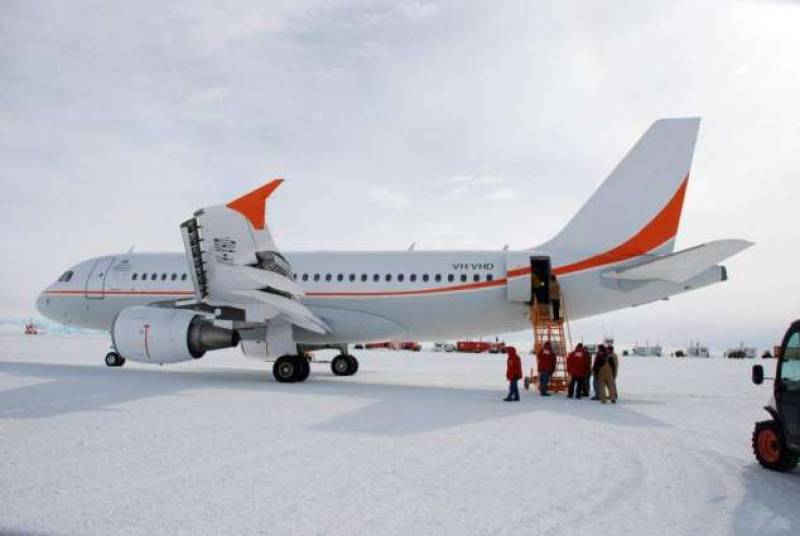 The Airbus A319 will transport over 200 expeditioners from the Tasmanian city of Hobart, as the summer research season begins to heat up on the icy continent.

"We have the first flight scheduled for early next week, followed by another four over the next two weeks, weather permitting," flight operator Skytraders, chief pilot Captain Garry Studd said in a statement on Friday.

"While we have landed the A319 on the sea-ice at McMurdo Sound before, this will be a new location, surrounded by mountains." Studd said, in order to land the plane safely after the 11-hour flight, conditions on the ground need to be perfect, or there is huge potential for things to go wrong.

"We are hoping for blue sky days and light winds!" he said.

As well as whether conditions, the integrity of the sea ice surface can also present massive dangers for such a large aircraft.

"The team at Mario Zucchelli have groomed the sea-ice, which is about two meters thick, to ensure a smooth landing," Australian Antarctic Division operations manager Robb Clifton said.

"It's really exciting that we are able to support the Italians and other Antarctic nations to get their people south to start their summer scientific research programs."Previously, the Italian program left from New Zealand in a Hercules L100 aircraft, but with more and more facilities being set up in Hobart, the city is becoming an important launching pad for scientist heading to Antarctica.

In December, the Airbus will also make three additional flights from Cape Town in South Africa to Troll Research Station, a facility operated by the Norwegian Antarctic Program.