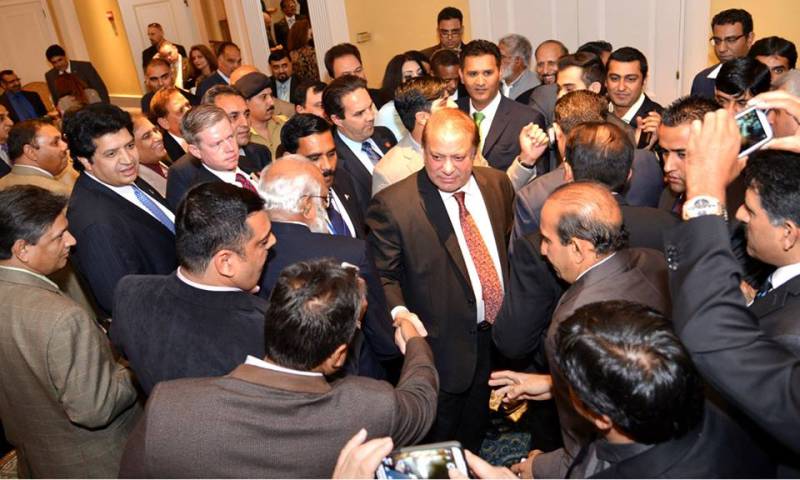 NEW YORK - Pakistan will continue to support the indigenous and peaceful struggle of the people of Indian Occupied Kashmir for the exercise of their right to self-determination morally, diplomatically and politically, said Prime Minister Muhammad Nawaz Sharif immediately upon arrival at New York. Pakistan reiterates that the resolution of the Jammu & Kashmir dispute is only possible by the realization of the right of self-determination of the people of Jammu & Kashmir in accordance with the UNSC relevant resolutions and according to the wishes and aspirations of the people of Jammu & Kashmir. The freedom struggle of the people of Indian Occupied Kashmir has been successfully passing from generations and now the Kashmiri youth has instilled a fresh vigor in the movement. India should realize that it will have to immediately end human rights violations in IOK and must understand that will of the people has to be established.

Interacting with members of Pakistani community upon arrival at New York, the Prime Minister said that today’s Pakistan is far better than the Pakistan of 2013. Pakistan is viewed as politically stable, more secured and economically vibrant country in the comity of nations. The country is emerging as the fastest growing economy in Asia and it has been duly acknowledged by the International Financial Institutions, Rating Agencies and renowned publications globally.

We have been focusing our energies entirely on eradicating terrorism and extremism from our country, revival of economy and achieving energy self-sufficiency, the Prime Minister said. Alhamdolillah, security situation in the country has improved a great deal due to the unmatched and relentless sacrifices of the security institutions, Law Enforcement Agencies, Police personnel backed by the unflinching resolve of the entire nation. We launched Zarb-i-Azb and National Action Plan after evolving a national consensus; Terrorism is receding from the country and we will rid the country from this cancer soon InshaAllah, the Prime Minister said. We have been successful in gripping the energy crisis that has been affecting our people for quite a long period of time. Different energy projects are satisfactorily being executed across different parts of the country including clean energy projects. We will add around 10000 MWs of electricity to the national grid by the start of 2018 and we will honor our commitment to the people of Pakistan by eliminating load shedding from the country before the end of our tenure in the government.

The Prime Minister said that CPEC will not only be a game changer but also the fate changer for the entire region. The Corridor will result into establishment of economic zones and generate employment opportunities across the country as well as significantly reducing poverty.

There is a reason to hope for the bright future of Pakistan now. Everything has been happening in front of you for the last three years. We will further consolidate the socio-economic as well as internal security gains with the backing of the entire nation, the Prime Minister concluded.