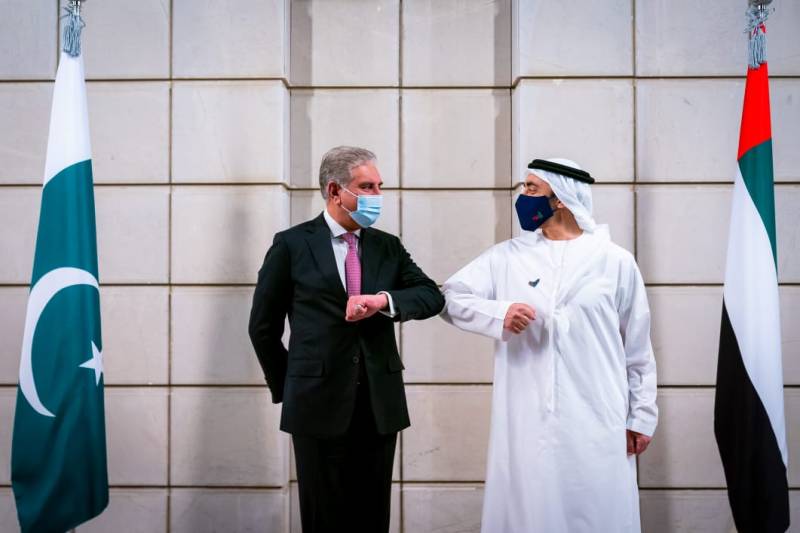 We look forward to showcasing Pakistan’s history, culture and high potential for trade, investment and tourism at @expo2020dubai. https://t.co/3ocaKYTLr9

Foreign Minister Qureshi appreciated the UAE’s progress and development over the last five decades. He attributed this achievement to the sagacious and visionary leadership of the nation. Foreign Minister Abdullah thanked him and acknowledged the valuable role played by the Pakistani Diaspora in the UAE’s growth and prosperity.

The Foreign Ministers reaffirmed their mutual desire to further strengthen cordial relations between the two countries. They reviewed the entire gamut of bilateral relations, discussing ways to enhance cooperation in diverse areas including trade, investment, infrastructure, energy, technology, tourism, and manpower. Foreign Minister Qureshi outlined his plans for showcasing the history as well as the future potential of Pakistan-UAE cooperation at EXPO 2020 Dubai in October 2021. The Foreign Ministers also discussed ways to provide fresh impetus to existing Pakistan – UAE ties. In this regard, they agreed to facilitate Ministerial level visits from both sides.

Foreign Minister Qureshi lauded the positive contribution of the Pakistani Diaspora in the UAE towards the development and progress of both countries. He emphasized the need for nurturing and strengthening people-to-people linkages, as well as removing impediments that hamper travel between the two countries.

The Foreign Ministers also exchanged views on regional and global issues of mutual interest. Foreign Minister Qureshi briefed his counterpart on the grave human rights situation in the Indian Illegally Occupied Jammu and Kashmir and Pakistan’s consistent efforts to support the ongoing peace and reconciliation process in Afghanistan.

Pakistan and the UAE enjoy close fraternal ties for almost five decades that are rooted firmly in common belief and shared values and culture. The relationship is marked by high-level visits and interactions that provide continuous momentum to bilateral cooperation. This was Foreign Minister’s second visit to the UAE in the past five months.

ABU DHABI – The United Arab Emirates (UAE) Monday extended the deadline for the repayment of the $2 billion loan ...