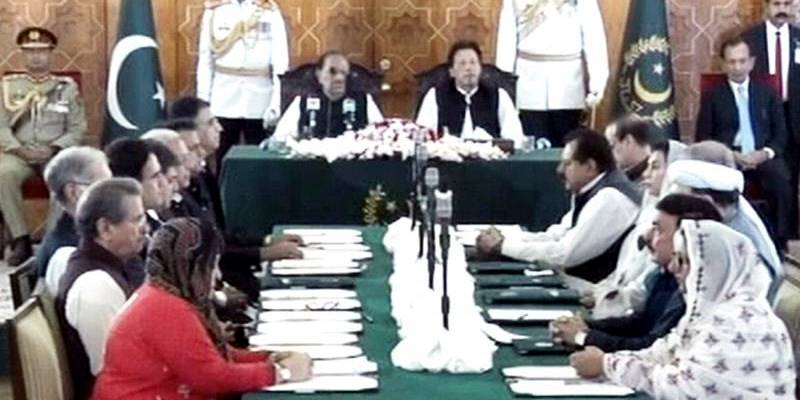 President Mamnoon Hussain administered the oath to the 21-member cabinet - 16 ministers and five advisers - during a simple ceremony held at the Presidency.

As many as 6 ministers in the cabinet have been taken from the ally parties. Imran Khan has given two ministeries to Muttahida Qaumi Movement-Pakistan (MQM-P) and one each to Awami Muslim League (AML), Grand Democratic Alliance (GDA) and Balochistan Awami Party (BAP) andPakistan Muslim League-Quaid (PML-Q).

ISLAMABAD - The newly elected Prime Minister Imran Khan has approved a 20-member federal cabinet, which will be ...

Among the five advisers to the prime minister, Dr Ishrat Hussain has been nominated as adviser on institutional reforms & austerity, Abdul Razzaq Dawood would be advisor for commerce, textiles, industry, investment & production, Arbab Shehzad would be advisor on establishment, Amin Aslam for climate change and Dr Babar Awan would be adviser on parliamentary affairs.

PTI's Spokesperson Fawad Hussain Chaudhry said that a key meeting of the cabinet will be held after the oath taking. He added that a framework to implement the Khan's promises to the national will be center of discuss in the meeting.

The cabinet will approve a plan to bring the money, which was sent abroad through illegal channels, back to Pakistan, Chaudhry announced in a tweet.

The newly elected prime minister on Saturday approved a 20-member federal cabinet. Interestingly, nine out of fifteen ministers, and three out of five advisers were senior officials in the former dictator Gen Musharraf’s era (1999-2007).