Pakistan's role crucial for lasting political settlement in Afghanistan: US 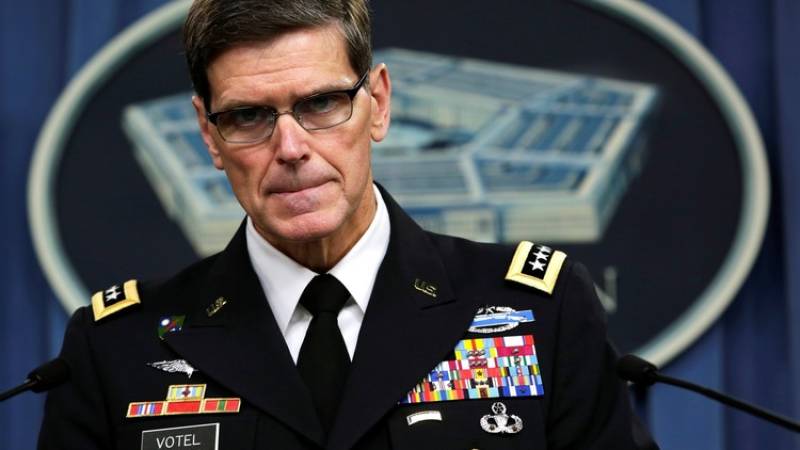 KABUL - The United States has vowed to continue closely working with Pakistan for establishing a durable peace in war-torn Afghanistan.

The top US general, Joseph L. Votel, who is overseeing the forces in the region stated this during a news briefing on Thursday.

“This is a South Asia strategy, and cooperation from Pakistan remains key to accomplishing the overall objective of a durable political settlement in Afghanistan,” Votel said.

“We continue to work closely with Pakistan to help them fulfill the important role that they have indicated they want to play. Now is the time for them to step forward.”

The army general said that he had seen positive signs from Islamabad, adding that Pakistan needs to put more pressure on Taliban pushing them to the dialogues. He reiterated President Donald Trump's stance of ramping up pressure on the country for targetting the militants on its soil.

“We also need to see them continue to make efforts to compel the Taliban to come to the table and take advantage of these opportunities,” the general said.

The statement comes amid growing speculation about efforts to start talks with the Taliban following an unprecedented ceasefire in Afghanistan during Eid holidays in June.

However, the Taliban have rejected holding any dialogue with President Ashraf Ghani's government, which they call an illegitimate. The militants also insisted that they would only talk with the US.

The US commander said, "While the fighting continues and work remains to be done in Afghanistan, progress there shows the president’s South Asia Strategy is working".

According to Defence department statement, since the Afghans took the lead for their security in August 2014, strong continued international support for the Resolute Support mission has been sustained, Votel noted. “This year, 29 of 39 NATO allies and partners increased their military or financial commitments to the campaign,” he said. “Significantly, we welcome our Gulf partners from the United Arab Emirates and Qatar to the Resolute Support mission.”

At the recent NATO summit, international partners agreed to extend funding to the Afghan security forces through 2024. “This is noteworthy and will provide us both time and resources to fulfill the intent of the president's South Asia Strategy,” the Centcom commander said.

While taking a conditions-based approach, “we and our Afghan partners are moving forward with a sense of urgency and purpose to ensure that we don't miss the opportunities that are being afforded by this continued support from the international community, or that have been created on the ground through activities like the recent cease-fire,” Votel said.

Overall, Resolute Support has witnessed remarkable changes in the environment, largely driven by the new strategy, the general emphasized.

The Afghan people and many Taliban members have become more ready for peace, he added, as evidenced by peace marches, local and international religious condemnations of the insurgency, broad diplomatic support to the Afghan-owned peace process, and the cease-fire, he said.