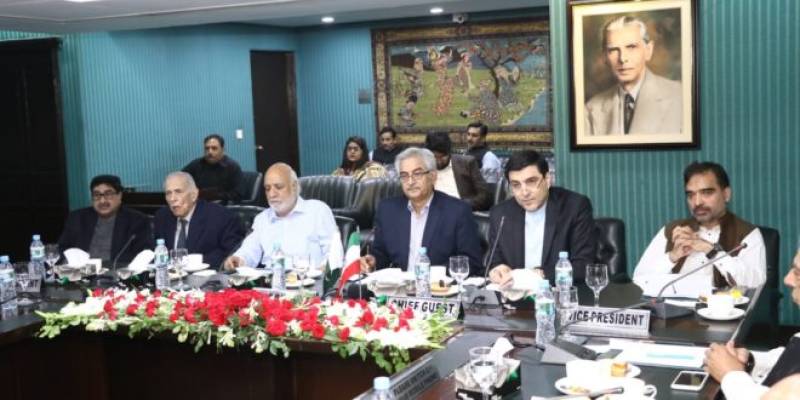 LAHORE - Consul General of Iran Reza Nazeri has said that Iran wants stronger trade and economic ties with Pakistan, therefore, barter trade should be encouraged as it will be equally beneficial for both countries.

According to a press release issued here, he was speaking at the Lahore Chamber of Commerce & Industry on Friday.

present on the occasion.

Iranian Consul General said, "Pakistan and Iran have common borders and cultural bonds and Iran has always tried to strengthen the bilateral relations with its neighbouring countries and Pakistan is its first preference in this regard."

He said that Iranian Consulate would extend full support to the trade delegations. He said that Iran would also arrange an exhibition of Iranian products in Punjab province. Pakistan has a distinguished status in milk production and experience of Iran in dairy sector could be beneficial for Pakistan, he added.

He said that Iran has great potential in the field of construction and could cooperate with Pakistan in this field and added that both countries should join hands for promotion of tourism sector as Iran and Pakistan have immense potential in this sector.

The LCCI President Almas Hyder said that the relation of LCCI and Iran consulate requires no introduction as over the years both offices have worked hand in glove with each other.

He appreciated the efforts of Iranian Consul General in creating ease of doing business through frequent direct flights between Pakistan and Iran.

He said that Iranian consulate is facilitating LCCI members through honouring recommendations for granting business visas to them.

There are hundreds of members of LCCI who have benefited

from this facilitation, along with other Chambers of Commerce