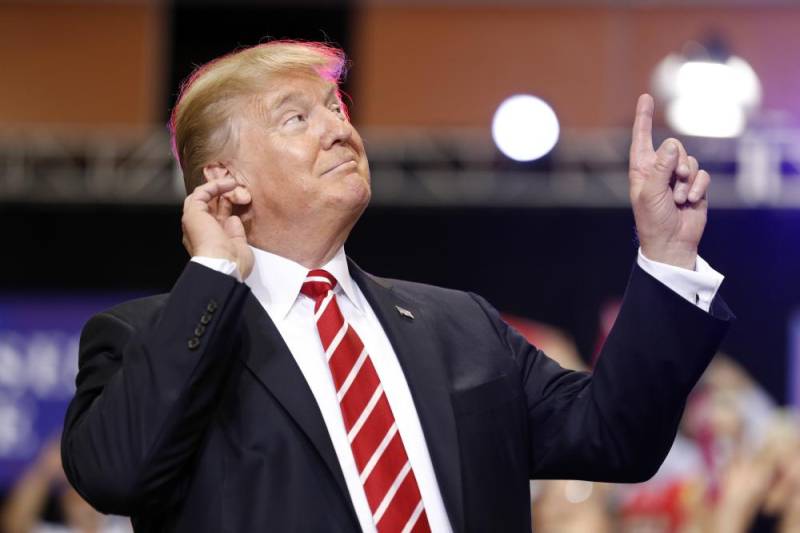 WASHINGTON - US President Donald Trump has announced to counter the multimillion-dollar lawsuit filed by the Democratic Party through the documents held by 'Pakistani mystery man', Clinton emails and Debbie Wasserman Schultz servers.

The US president - who is embroiled in multiple controversies, from Russia probe to former FBI chief, James Comey's sensational disclosures - did not specifically mention about the Pakistani he mentioned in his tweet, however, expressed that the filing of lawsuit was good, besides revealing his future plans in this regard.

Just heard the Campaign was sued by the Obstructionist Democrats. This can be good news in that we will now counter for the DNC Server that they refused to give to the FBI, the Debbie Wasserman Schultz Servers and Documents held by the Pakistani mystery man and Clinton Emails.

"We will now counter for the DNC Server that they refused to give to the FBI, the Debbie Wasserman Schultz Servers and Documents held by the Pakistani mystery man and Clinton Emails," the Republican leader tweeted.

The lawsuit Trump referred to, was filed by his political rivals, the Democratic Party on Friday, about an alleged conspiracy hatched by Russia, WikiLeaks, and top officials from Donald Trump's campaign to tilt the 2016 US presidential election in the Republican's favour.

Lodged by Democratic National Committee, the complaint filed in federal District Court in Manhattan alleges that Russia informed Trump's campaign that it had conducted a cyber-attack on the DNC, leading to the release of information 'damaging' to Hillary Clinton.

It states that a close Trump advisor, Roger Stone, appeared to have "advance knowledge" of plans by WikiLeaks to disseminate some of the stolen information — as part of what the suit claims was a wide-ranging conspiracy to influence the presidential polls.

The Democrats allege that in a series of meetings and communications, Russian officials coordinated with Trump campaign officials for more than a year as they managed to pave way for Trump's entry to the Oval Office.

"The Trump campaign and its agents gleefully welcomed Russia's help," according to the 66-page complaint.

DNC chairman Tom Perez said in a statement that during the 2016 presidential campaign, Russia launched an all-out assault on US democracy, and it found a willing and active partner in Donald Trump's campaign.

The lawsuit - that comes at a time when Special counsel  Robert Mueller's probe into the Russia meddling is ongoing - targets Trump's campaign, his son Donald Trump Jr, his son-in-law Jared Kushner and numerous other top guns including Russian foreign military intelligence agency, and WikiLeaks and its founder Julian Assange.

Whether the lawsuit heads to litigation is unclear because many countries have immunity from US lawsuits but DNC argues that Russia forfeits that protection because the cyber-attack constituted a "trespass" on private property, however, in any case, Donald Trump would be enlisting the help of a national, belonging to the country, he accused of lying to US.

Who's the Mysterious Pakistani?

Although Donald Trump did not identify which pakistani would be of help to him regarding his legal battle, an IT officer of Pakistani origin named Imran Awan seems to be the individual.

Imran was under the radar of Federal Bureau of Investigation in August last year for the alleged theft of computers and leaking sensitive information.

An associate of former DNC chairwoman Debbie Wasserman Schultz, Awan was arrested in July last year at Dulles International Airport for alleged bank fraud but the probe focused on the compromise of sensitive data and more specifically DNC emails, that could pose a threat to national security of the country looking for new options under Trump’s presidency.

Awan worked for Debbie Wasserman Schultz for thirteen years since she came into office in 2004 as a Florida representative and has been a close confidante of the lady despite warnings by her fellows about his shady past.

The probe started in April 2016 when alleged theft of computer equipment from Congress was reported but the episode turned more suspicious after it was reported that Imran and his brothers gained access to specific computer networks without permission.