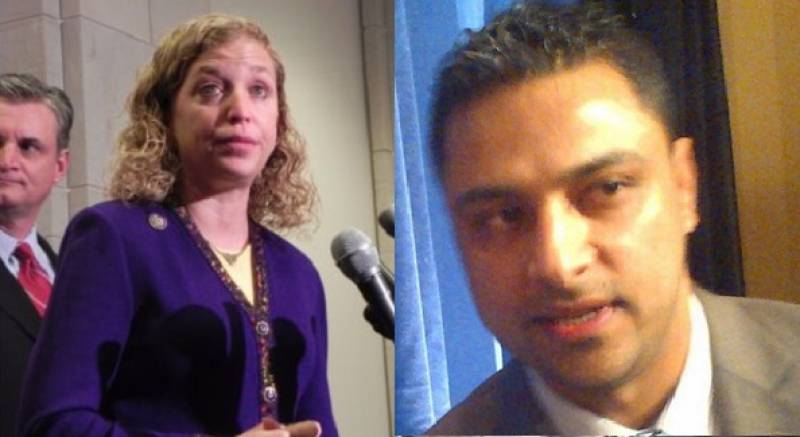 WASHINGTON - An IT officer of Pakistani origin is currently under probe by Federal Bureau of Investigation for their alleged role in the theft of computers and leaking sensitive information from the network of Democratic National Committee, a governing body for the United States Democratic Party.

Imran Awan, an associate of former DNC chairwoman Debbie Wasserman Schultz’s was arrested last month at Dulles International Airport for alleged bank fraud but the probe is focusing on the compromise of sensitive data and more specifically DNC emails, that could pose a threat to national security of the country looking for new options under Trump's presidency.

Awan worked for Debbie Wasserman Schultz for thirteen years since she came into office in 2004 as a Florida representative and has been a close confidante of the lady despite warnings by her fellows about his shady past.

The probe started some 16 months ago when in April 2016, alleged theft of computer equipment from Congress was reported but in February, the episode turned more suspicious after it was reported that Imran and his brothers gained access to specific computer networks without permission.

The 37-year-old Awan landed in the US as a teenager and became a citizen in 2004. He arranged jobs for the others, who all floated among the DC offices of various U.S. representatives, including four from New York.

The investigators are also focusing on alleged stealing of sensitive data from congressional offices and making it available to Pakistani or Russian intelligence, sources said.

But Awan's lawyers deny any stealing of sensitive information claiming that his client was being subjected to interrogation for his Muslim identity.

Moreover, Schultz also rubbished the perception that the staffer, of Pakistani origin, was involved in any suspicious activity related to the computer network.

Awan had access to Wasserman Schultz’s emails at both Congress and the DNC, where he had been given the password to her iPad. After DNC emails and research files were stolen during the presidential election, Wasserman Schultz reportedly refused to turn over the server to the FBI and instead called in a private firm to investigate.

The scandal that has not yet made headlines across Pakistan has stimulated US officials who earlier suspected that Russia was allegedly involved in influencing presidential elections of November.

Sara Carter, an investigative journalist linked to Circa News hinted at the possibility of Awan's bid to leak sensitive information of US to Pakistan, a close ally of China and Russia.

It bears mentioning that the debate of hacking and influencing US elections through leak of Clinton's emails has been a constant bone of contention and the recent probe regarding Imran Awan.