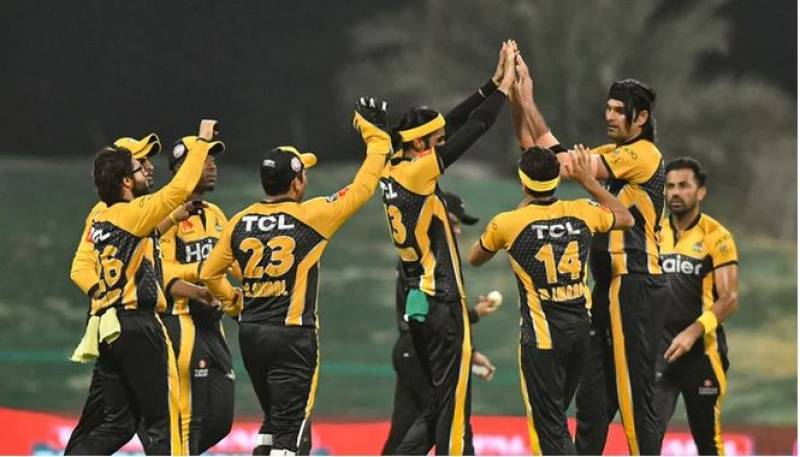 Zalmi defeated Kings by five wickets in their 176-run chase and knocked the Imad Wasim-led side out of the tournament.

Zalmi will now meet Islamabad United in Eliminator 2 on Tuesday, June 22. The winner of this match will qualify for the final and face Multan Sultans.

Zalmi openers Hazratullah Zazai and Kamran Akmal took them to 49 before Noor Ahmed drew the first blood. Ahmed removed Kamran for 13 in the fifth over of the Zalmi's innings.

Zazai hit the Kings bowlers in all directions and completed his half-century from 23 balls in the seventh over.

The Afghan player hit so cleanly that Kings star bowler and fellow countryman Ahmed looked clueless against him.

Peshawar lost their second wicket from the last ball of the 10th over —Thisara Perera removed Imam-ul-Haq to put Zalmi two down.

Perera removed the dangerous Zazai for 77 and put Zalmi three down in the 12th over.

The removal slowed down runs for Peshawar and they needed 44 runs from the last 30 balls.

And in the 18th over, Zalmi lost Khalid Usman who was bowled by Mohammad Ilyas. At that point, Zalmi needed 21 runs in 16 balls.

In the 19th over, Mohammad Amir removed Shoaib Malik to give the Karachi side some hope. When Malik was dismissed, Zalmi needed 13 runs from 10 balls.

At the end of Amir's over, Zalmi needed seven runs in six balls to win.

However, West Indian Sherane Rutherford guided his team to the finishing line with one ball to spare.

Kings were restricted to 175 runs by the Zalmi bowlers in the first innings.

Zalmi's Mohammad Irfan drew the first blood for his team. The right-hander trapped Sharjeel on the second last ball of the sixth over and took the first wicket.

In the next over, Umaid Asif removed Martin Guptill and put Karachi two down.

Irfan removed the dangerous Danish Aziz to put Karachi three down in the 12th over.

Babar Azam played a crucial role for his team, completed his half-century in the 14th over. Wahab Riaz dismissed him in the 15th over after he tried to hit a six off the Zalmi captain's bowling.

Thisara Parera made an important 37 for his side before he was dismissed by Umaid Asif.

Wahab Riaz then dismissed Chadwick Walton to put the defending champions six down.

And in the last over, Mohammad Imran removed Imad Wasim from the first ball of the 20th over.

Imran gave just 10 runs in the last over to help making sure that the Kings end their innings at 175/7.

Before the start of the match, Peshawar Zalmi won the toss opted to bowl first.

ABU DHABI – Multan Sultans beat Islamabad United by 31 runs and made their way to the finals of the sixth edition ...