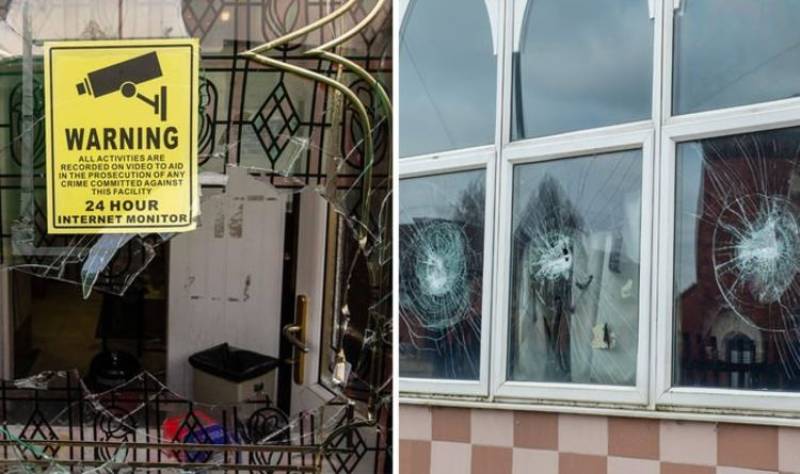 BIRMINGHAM - As many as five mosques in UK's Birmingham city were vandalized early Thursday morning, setting off alarm bells in the power corridor of the country.

Police said they first received reports of a man smashing windows with a sledgehammer on Birchfield Road at 02:30 GMT.

Officers then received reports about a similar attack in Erdington about 45 minutes later, with more in Aston and Perry Barr reported; another on Albert Road was struck at 10:00 GMT.

Seven windows and two doors were smashed up in the attack at the Witton Road Islamic Centre in Witton.

The Birmingham Council of Mosques confirmed that at least five mosques had been damaged.

"We were deeply horrified to hear a number of mosques were vandalised during the early hours of this morning. Birmingham's mosques are a place of worship, serenity and a source of peace and tranquillity. We are appalled by such acts of hate/terror," the council said in a statement.

Police have yet to ascertain the motive of the unknown suspect and no arrests have been made yet. The Counter-Terrorism Unit is investigating the incident.

Home Secretary Sajid Javid said it was "deeply concerning and distressing to see a number of mosques have been vandalised in Birmingham overnight".

"Let me be clear, hateful behaviour has absolutely no place in our society and will never be accepted." the home secretary said.

Unfortunately the Witton Road Islamic Centre was attacked overnight by an individual who used a sledgehammer to break the windows.

'I have spoken with the Chief Constable & will be in constant contact with community leaders throughout the day. I would urge all residents to remain calm & call Crime Stoppers with any info you may have,' she said on Twitter.

The attacks come just six days after 50 Muslims were killed in a terrorist attack on two mosques in Christchurch, New Zealand in a terror attack launched by Australian-born Brenton Tarrant.

Birmingham is one of Britain’s largest cities and home to one of its biggest Muslim communities. More than one in five people there have declared Islam as their religion, as per the New York Times.