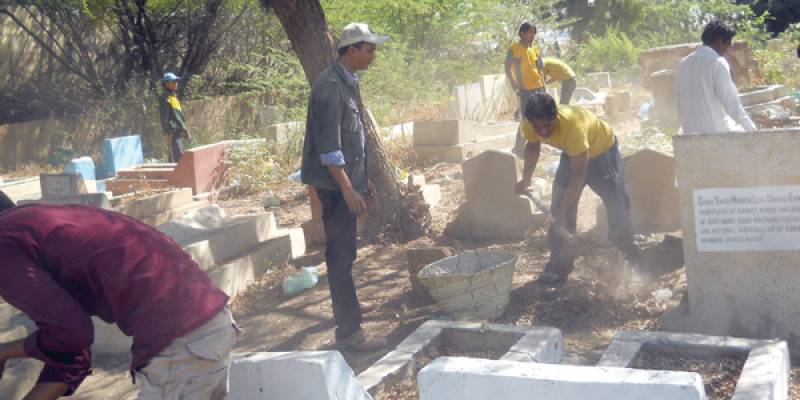 LAHORE (Ihsan Qadir) - Local Hindus are forced to not lay their dead ones to rest close to their homes as land mafia in Lahore sealed a centuries old cemetery of Hindus before its inauguration, News Lens Pakistan reported.

Following the petition from Hindu representatives, the Supreme Court of Pakistan had ordered the provincial government of Punjab in August 2012 to get land vacated from the mafia.

The court also ordered the authorities to construct a graveyard on 14,200 square feet of land for the Hindus by December 25, 2013.

The provincial authorities completed the work in May 2014 but it has not been inaugurated yet, resulting in irritation among Hindu communities.

Amarnath Randhawa, the President of Hindu Sudhra Sabha, an NGO which works for the rights of the Hindus, expressed extreme frustration due to the sealing of the graveyard by the administration yielding to land mafia’s tactics. “Our community is at a loss as to burial of their dead ones.

We got cemetery after 25-year long legal battle in different courts against land mafia and finally the Supreme Court gave decision in our favor.

We completed arrangements for inauguration on May 24. But, land mafia brought goons at the night between May 23 and May 24 and forced us to stop inauguration of graveyard”.

He added, “The mafia named a grave of Muslim saint Baba Haveli Shah and pasted slate of his name on the grave. They instigated goons that Hindus desecrated the grave of the saint. Consequently, since then, we wrote applications to from President of Pakistan to higher authorities of local government but to no avail.”

According to Pakistan Balmik Sabha, an NGO that works for Hindus’ rights, around 230,000 Hindus live in Pakistan while Hindu population in Lahore is 400.

A local Hindu Sameer, 24, a student of Computer Science in Government College University told News Lens Pakistan that the mafia had deprived them of the facility of having a cemetery.

“Our parents are extremely worried about burial. We are Pakistanis since generations and we should be given our right of burial in Lahore.”

Talking to News Lens Pakistan, 81-year-old Heera Lal could not express his feelings in words.

‘I was born in Lahore and want to die in Lahore. The government should give us this fundamental right.”

On the other hand, Abdul Salam, who was named a land grabber in Supreme Court verdict believes that the cemetery adjacent to Christian, Muslim and Bahai graveyards did not belong to the Hindus.

“It was part of common graveyard which Hindu land grabber mafia, led by Amarnath Randhawa, is trying to occupy.

They desecrated the grave of Muslim saint Baba Haveli Shah by declaring him a Hindu and pasting a slate namely Baba Haveli Ram, a Hindu name which angered Muslims.

That’s why we being local politicians interfered and stopped inauguration of the graveyard,” Salam said during a telephonic conversation with News Lens Pakistan.

Salam said he supported Hindus for the graveyard as it was being built on Supreme Court’s orders.

But, he will not allow desecration of Muslim saint’s grave inside the cemetery, which was part of the common graveyard before Supreme Court’s ruling.

During a telephonic interview, Assistant Commissioner of Shalimar Town said he was in favor of the inauguration of Hindus cemetery on legal and moral grounds, but, Muslims are very angry therefore the local authorities can could not do anything for now however, this issue will be resolved soon.