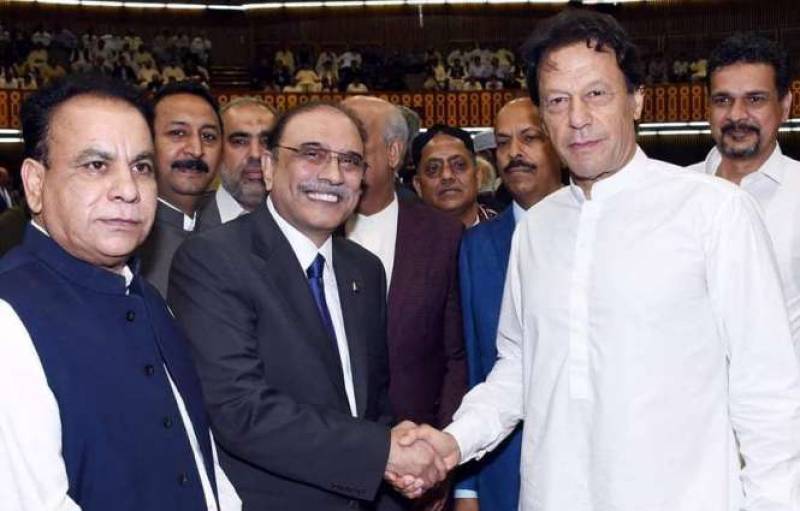 Addressing the media on Sunday, the former president highlighted that the PTI government will fail in completing its tenure as it is not fit to run the country.

'The PTI government’s incompetence will not remain hidden for very long,' claimed Zardari.

Claiming that the government 'is the centre of conspiracies' and 'Islamabad is the city of conspiracies', the politician called for the formation of a policy to determine the direction in which the country is headed.

Taking aim at National Accountability Bureau (NAB) Chairman Javed Iqbal, Zardari said he was not saying anything bad against him, only his ways and thinking.

These are mentally small people. They can’t handle little power, said the lawmaker.

Zardari continued that the National Reconciliation Ordinance (NRO) never benefited him as all the old cases against him had been reopened after the former chief justice Iftikhar Mohammad Chaudhry annulled the ordinance.

The Muttahida Qaumi Movement (MQM) and other political parties and former prime minister Nawaz Sharif were a beneficiary of NRO, he said.

To a query, Zardari said that the cases he was facing today were all made up by Sharif, but hastened to add that the distances can be shortened.

To a question about a bill to create a new province in South Punjab, the PPP leader said they have not received any reply from the PTI government over the matter.

The legislator observed that when PPP took over the reins of the government, the US aid had been suspended and the situation was the same as it is now.