Nawaz Sharif throws some serious punches at the 71st UNGA 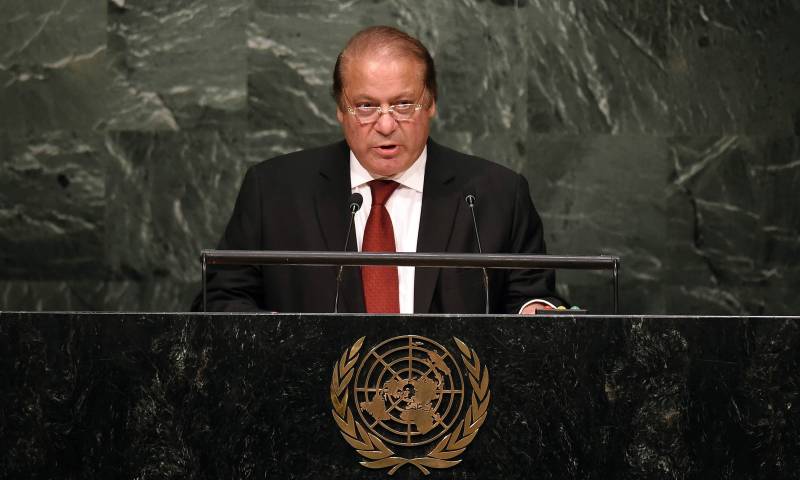 NEW YORK (Usman Shami) - Yesterday, Prime Minister Nawaz Sharif addressed the United Nations General Assembly session for the fourth time during his current tenure. This year, as well, he raised the Kashmir issue, however, the intensity was much higher as compared to recent years. The fundamental reason behind his loud voice was the resurgence of the freedom struggle in held-Kashmir and the Indian atrocities to stop the civilian protests following the killing of Burhan Wani in July this year.

After a gap of years, this is the first when Pakistan is taken up Kashmir at the UN in a strongest manner. The issue was mentioned by Prime Minister Nawaz Sharif in his last year's speech, but his tone was not this much effective. On Wednesday, his address lasted for some 18 minutes and most of the time spoke about India and Kashmir. While talking about Burhan Wani, he called him a martyr and a face of Kashmiri youth. This was surprising for Pakistani observers even, and the facial expressions of Pakistanis journalists present at the UNGA clearly confirmed this.

Additionally, Nawaz Sharif also announced to present a dossier based on the Indian violations in Occupied Kashmir to the United Nations. He also called on the General Assembly and the Security Council to implement its resolution on Kashmir.

No doubt, it was Prime Minister's most powerful speech against India so far, but simultaneously, he also offered India to begin unconditional bilateral dialogue, leaving the door of reconciliation open.

This fact also cannot be ignored that Pakistan's continuous efforts have kept the Kashmir issue alive at international level, despite Indian propaganda. Although, no solution of the problem is expected in near future, it is now almost impossible for India to divert global attention from human rights violation committed by Indian troops in the occupied valley.

The way Pakistan has recently advocated the Kashmir case at global forums, is surprising for India as well. After Nawaz Sharif's speech at the UNGA, India is now expected to hurl the same old allegations against Pakistan. However, this time Indian Prime Minister Narendra Modi is not attending the session, and instead of him Foreign Minister Sushma Swaraj will address the General Assembly. A minister may fail to attract global attention, as compared to a prime minister like Modi.

Before his UN address, Prime Minister Nawaz Sharif also met his Chinese counterpart Li Keqiang, who reiterated to support Pakistan at every international forum. He said China fully understands Pakistan's stance on Kashmir and expects the whole world to do the same. This statement categorically rebutted the Indian propaganda which recently suggested that Beijing may withdraw its unconditional support to Islamabad, following the Uri attack. Several news reports and opinion pieces published in Indian media even termed China's condolence on the attack as a serious blow to Pakistan. Now, after the meeting, it could be inferred the Indian propaganda has died its own death.

Meanwhile, China has also emerged as a third party to the Kashmir issue, and as long as Beijing is backing Islamabad, it is almost impossible for New Delhi to isolate Pakistan globally. The latest statement by the Chinese Prime Minister could be declared a diplomatic success for Pakistan.

Yesterday, two lawmakers, Ted Poe and Dana Rohrabacher, also moved a bill in the US House of Representatives seeking Pakistan to be declared as a state sponsor of terrorism. If the bill is adopted, the US government would be asked to submit a report on the matter within 90 days. Later, US Secretary of the State would also present a report on the same subject. And if the bill gets through all these stages successfully, Pakistan would be designated as state sponsor of terrorism.

This development is apparently disturbing for Islamabad, however, it may also be noted that the lawmakers who moved the motion are already known as anti-Pakistan lobbyists. Ted Poe, who belongs to Texas, has been leveling similar allegations, and California's Dana Rohrabacher is active for Baloch separatists for a long time. Clearly, the motion is an attempt by Indian elements to put diplomatic pressure on Pakistan. Pakistani media's extraordinary coverage to this bill may increase psychological pressure, but in reality it carries no weight. The tenure of the current US congressmen will expire before the completion of the process on this resolution, and the lawmakers who behind it also understand it very well. However, the Pakistani response indicates that it was something unexpected for them. If Pakistan strengthens its diplomatic presence in the United States and pays attention towards lobbying in the US legislature, our diplomats can become aware of such developments in advance.