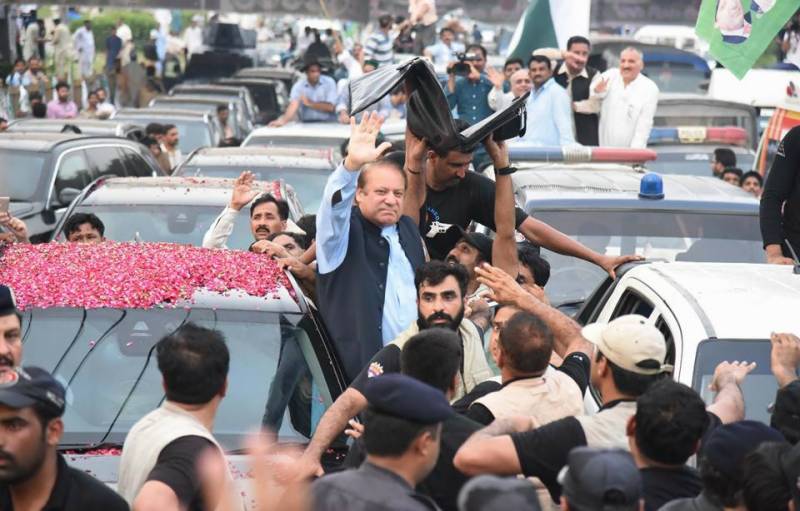 ISLAMABAD - The Supreme Court has ordered to restore former Prime Minister Nawaz Sharif’s lawful security, days after the unauthorized officials in all the four provinces were stripped of additional security.

Hearing a suo motu case related to security protocol of individuals with no official entitlement on Monday, Chief Justice of Pakistan Justice Saqib Nisar remarked that they did not want to put anyone’s life in danger.

Without mentioning anyone, the chief justice remarked that some people had objections regarding its order of retracting security, adding that those facing a security risk should keep their escorts.

"Nawaz Sharif should get security as a former prime minister," the top judge observed and directed to ascertain whether Awami National Party chief Asfandyar Wali Khan had security escorts.

LAHORE - The police chiefs of Punjab and Sindh have taken back the security provided to unauthorised individuals in ...

Justice Nisar remarked that it was for the law enforcement agencies to determine whether a person needs security personnel or not.

“We haven’t ordered the withdrawal of anyone’s security.” clarified the top judge.

Meanwhile, Islamabad Inspector General of Police, Sultan Azam Temuri informed the court that security is provided to influentials on the directions of the Interior Ministry.

The chief justice also directed the provinces to come up with security guidelines and adjourned the hearing for a week.

Last week, Chief Justice Mian Saqib Nisar had directed inspector-generals of Islamabad and all four provinces to withdraw security escorts from people who were not entitled to it.

As a result, around 13,000 police officials were called back from their respective security duties including 4610 from Punjab.

Soon after the former Prime Minister was deprived of security, Maryam Nawaz took to Twitter and decried the move.

In a direct reference to the top judge, the former first daughter clarified that if something happens to him (Nawaz), you will be responsible.

Maryam Nawaz also retweeted a video, showcasing the motorcade of the top judge as he arrived at the Judicial Complex, Charsadda.