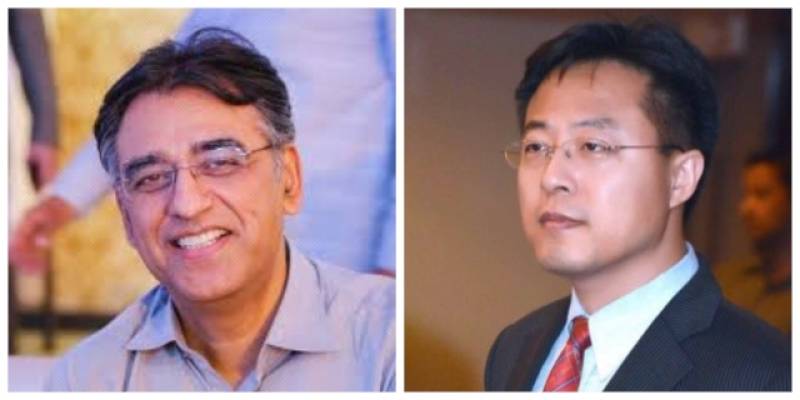 ISLAMABAD – A high-ranking Chinese official in Pakistan has come out in support of former finance minister Asad Umar, who quit Prime Minister Imran Khan’s cabinet last week, for showing the mirror to Western democracies over their double standards.

Lijian Zhao, who serves as China’s Deputy Chief of Mission of the Chinese Embassy in Islamabad, praised the Pakistan Tehreek-i-Insaf stalwart as a "man of integrity" who "dares to speak the truth"

In his tweet, Zhao also shared a clip of an interview Asad Umar gave to Stephen Sackur on BBC News' programme ‘Hard Talk’ in December last year, in which the then finance minister had called Western leaders out for criticising Pakistan's relationship with Saudi Arabia and China.

Asad Umar: I have never lectured on what kind of system should a country have. Maybe western leaders should be ashamed of themselves, talking about democracy, freedom & reaching out to same Saudi pockets, to talk out billions of dollars of business deals. https://t.co/gsDmEyyRJf

“I have never lectured on what kind of system should a country have, maybe the western leaders should be ashamed of themselves, talking about democracy, talking about freedom and then reaching out to the same Saudi pockets, to talk out billions of dollars of business deals,” Umar had said in the interview.

Also, in the famed BBC show, Asad Umar came hard on US President Donald Trump, saying that “Mr Donald Trump stands up and openly says, 'I am getting so much business from Saudi Arabia for me to worry about what happened to Khashoggi maybe some of the western leader should be ashamed of themselves’.”

The former minister added that "We are just being consistent, in bilateral relationship which remained the same, regardless of who was in power.”

In response to a question regarding the Trump administration's reservations over a bailout package by the International Monetary Fund (IMF) to Pakistan, Umar had suggested that US Secretary of State Mike Pompeo "should worry about his China debt problem". Pompeo had earlier warned that the US will not allow the Fund to lend Pakistan money which may be used to repay debts to China.

"USA is the largest debtor in the world to China; they owe $1.3 trillion [to China]," Umar had told Sackur. "What [does] Pakistan owe to China? Less than 10 per cent of Pakistan's foreign debt is owned by the Chinese, 90 per cent is non-Chinese."

He had further questioned the "sudden" interest in Pakistan's lenders, saying that the question had never been raised in the past even though the country had sought IMF's assistance 12 times in the past 30 years.

Talking about IMF programs, Umar had said that Pakistan have been into 12 different IMF programs, in the last thirty years.” He had questioned that “why has this question never been asked about which source or which country has lent how much money to Pakistan, why it is suddenly, all this much interest and how much money has come from China why was the same question not being asked when the lenders, were western banks”.

Asad Umar had further asked that why those (Western lenders) involved in an attempt to destabilise Balochistan through foreign terrorist funding, training aiming to subvert CPEC, were never posed to a question for their activities.

When asked “who is doing that?” Asad Umar had told the interviewer that the external forces led by India are involved in the activities aiming to destabilize Balochistan.

Hours after the Chinese official lauded the ex-minister for his bold remarks, Asad Umar thanked Lijian Zhao and lauded China for proving wrong its critics that had long predicted the failure of its economic model.

Very kind of you. About time we all stood up for the truth instead of letting the colonial mindset lecture to us. For years we have heard them say that the chinese model was wrong and bound to fail. We are proud that china has proven them wrong #PakChinaFriendshipZindabad https://t.co/XdjtdQJkIL

"For years we have heard them say that the Chinese model was wrong and bound to fail. We are proud that China has proven them wrong," Umar tweeted.

"About time we all stood up for the truth instead of letting the colonial mindset lecture to us," he added.

Asad Umar had stepped down as foreign minister last week in first major cabinet reshuffle by PM Imran Khan. His abrupt exit came as major setback for the PTI government, which is struggling to put cash-stripped country back on track.