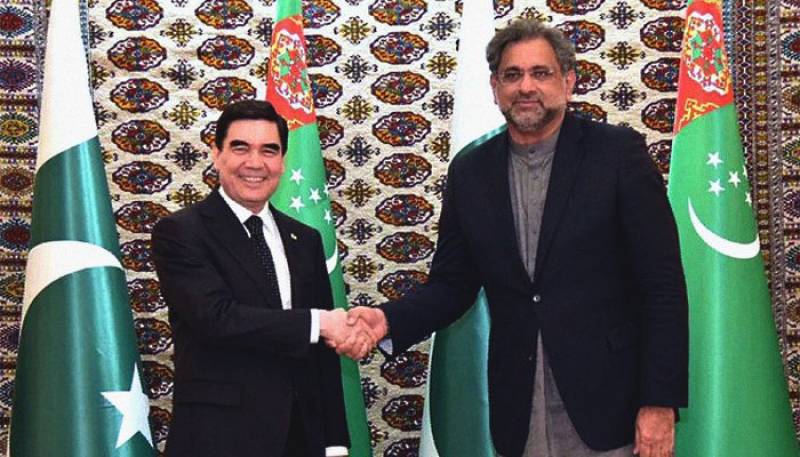 The prime minister stated this while addressing the inauguration ceremonies of TAPI and associated projects in Mary, Turkmenistan.

On Thursday, the prime minister along with the delegation, comprising Minister of State for Petroleum Jam Kamal Khan, Provincial Minister for Labour and HR Raja Ashfaq Sarwar, Ambassador of Pakistan to Turkmenistan Mr. Murad Ashraf Janjua and other senior government officials, reached Mary on the invitation from the President of Turkmenistan Gurbanguly Berdimuhamadov.

Earlier, both the leaders, in a meeting, highlighted the importance of TAPI pipeline project as an energy, trade and transit corridor and held fruitful discussions on subjects of mutual concern, including issues of regional security.

The President stated that Turkmenistan valued its special relations with Pakistan and highly appreciates the support given by Pakistan.

He mentioned that Turkmenistan-Pakistan relations were based on two pillars namely Energy Security of which TAPI is a flagship project, and connectivity to include rail, road, IT and fiber optic.

Turkmenistan president also expressed keen interest in Gawadar Port project. Berdimuhamadov expressed hope that Pakistan will benefit from the supply of gas especially for the industry once TAPI reaches Pakistan.

The Prime Minister stated, “…tomorrow is a historic day when another pipeline is going to be inaugurated”. He termed the materialization of TAPI as a success of the vision and commitment of President Berdimuhamadov and appreciated the personal commitment of the President in the realization of the project.

He observed that the Port of Gwadar will provide the most efficient access to the sea to Turkmenistan. The Prime Minister apprised the President of the successful expansion in road network across the length and breadth of Pakistan including six-lane motorways that will connect to Western China and the regional countries.

“We see Pakistan as the hub of connectivity in the region,” the Prime Minister said, adding that CPEC was the most visible part of the Belt and Road Initiative and stressed on enhancement in bilateral cooperation between the two countries.