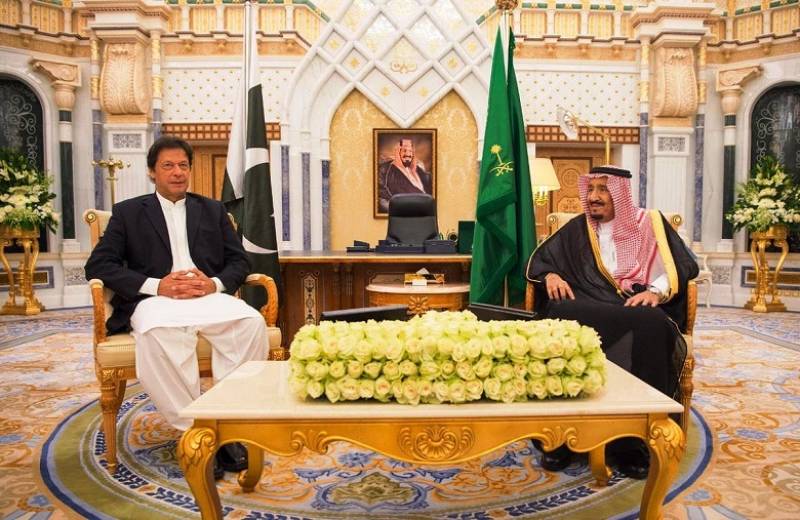 RIYADH - Saudi Arabia has agreed to loan Pakistan $3 billion for one year as a balance of payment support and to provide a one-year deferred payment facility for oil payments, up to $3 billion, Foreign Office said on Tuesday.

According to a press release issued by the foreign office, Prime Minister's visit to Saudi Arabia has resulted in significant understandings between Pakistan and Saudi Arabia.

It was also agreed that a one-year deferred payment facility for import of oil, up to $3 billion, will be provided by Saudi Arabia. This arrangement will be in place for three years, which will be reviewed thereafter.

"At the invitation of the Custodian of the Two Holy Mosques, His Majesty, King Salman bin Abdulaziz, the Prime Minister of the Islamic Republic of Pakistan, PM Imran Khan visited Saudi Arabia to participate in the Future Investment Initiative (FII) Conference on 22-23 October 2018," according to the foreign office.

The Crown Prince agreed to the Prime Minister's suggestion to reduce visa fee for Pakistani workers, which is a significant step towards enhancing Pakistan's workforce in Saudi Arabia, as well as facilitating travel of people from both countries.

Far-reaching decisions on bilateral economic and financial cooperation were also agreed. These included:

a. A MoU was signed between the Finance Minister Asad Umar and the Saudi Finance Minister, Muhammad Abdullah Al-Jadaan. It was agreed Saudi Arabia will place a deposit of USD 3 Billion for a period of one year as a balance of payment support.

b. It was also agreed that a one-year deferred payment facility for import of oil, up to $3 billion, will be provided by Saudi Arabia. This arrangement will be in place for three years, which will be reviewed thereafter.

c. The earlier visit of the Saudi delegation had evaluated the possibility of investing in a petroleum refinery in Pakistan. Saudi Arabia confirmed its interest in this project, and a MoU will be signed after obtaining cabinet approval.

d. Saudi Arabia expressed interest in the development of mineral resources in Pakistan. For this purpose, the Federal Government and the Government of Balochistan will consult, following which a delegation of the Kingdom will be invited to visit Pakistan.

On 23 October, after the inauguration of the FII Conference, a Pakistan-specific session was organized, in which Prime Minister underlined Pakistan's priorities towards optimizing the economy and attracting foreign investment. Stressing the focus of his government on human resource development, he highlighted the potential of Pakistan's youth, identified lucrative investment opportunities in the tourism sector, minerals, coal and gas exploration, and Information Technology.

He mentioned the successes of Pakistan in the fight against terrorism, which has brought peace and stability to the country and elaborated the significance of China Pakistan Economic Corridor (CPEC), including the investment opportunities in the Special Economic Zones. The Prime Minister also took several questions from the audience comprising hundreds of business entrepreneurs.