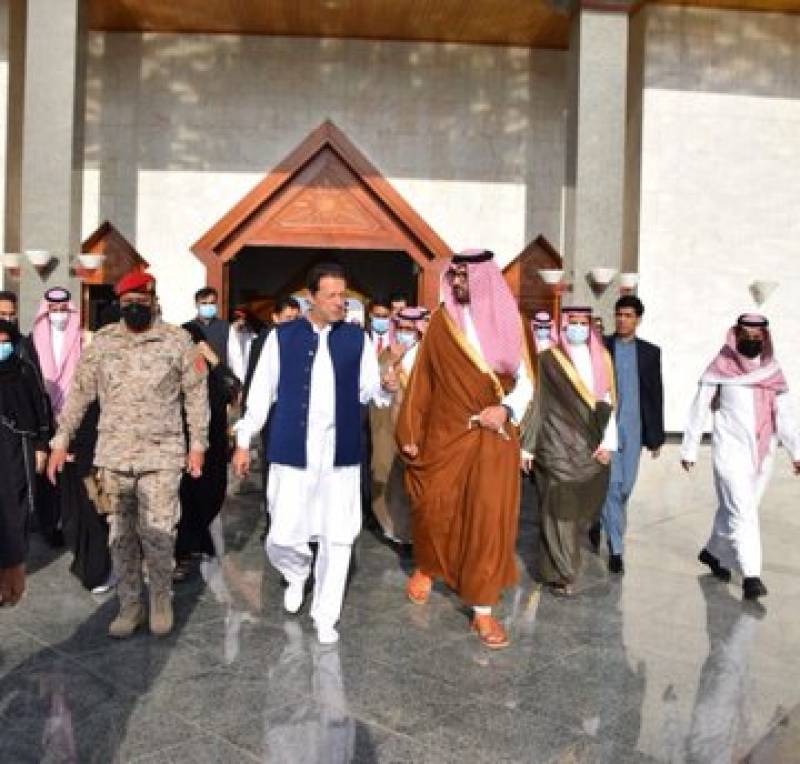 ISLAMABAD – Prime Minister Imran Khan on Saturday reached Saudi Arabia on a three-day visit to attend the launch ceremony of the 'Middle East Green Initiative (MGI) Summit' being held in Riyadh, according to the Prime Minister's Office (PMO).

He paid his respects at Roza-e-Rasool (Peace be Upon Him). Earlier, Khan arrived at Madinah Munawara along with delegation on a three day official visit to Saudi Arabia.

The PM was received by Deputy Governor of Madinah Prince Saud bin Khalid Al-Faisal upon reaching the city and was "given a warm reception".

The premier is accompanied by a high-level delegation, including Foreign Minister Shah Mahmood Qureshi and other members of the Cabinet.

At the MGI Summit, PM Imran will share his perspective on the challenges faced by the developing countries due to climate change. Khan will also highlight Pakistan’s experience of launching nature-based solutions to address the environmental challenges.

The MGI Summit is being held at the initiative of Crown Prince Mohammed bin Salman bin Abdulaziz. The event is the first of its kind in the Middle East region.

“Green Saudi Arabia” and “Green Middle East” initiatives were launched by the Crown Prince in March 2021 aimed at protecting the nature and planet. Prime Minister Imran Khan welcomed these two initiatives and offered to share experiences and lessons from Pakistan’s “Clean and Green Pakistan” and Prime Minister’s “10 billion Tree Tsunami.”

Khan will have bilateral interaction with the Saudi leadership, with particular focus on advancing economic and trade relations; creating more opportunities for Pakistani workforce; and welfare of Pakistani Diaspora in the Kingdom. The two sides will also exchange views on regional and international issues of mutual interest.

During the visit, PM Imran will also participate in an event on promotion of investment in Pakistan and interact with leading investors and businessmen from Saudi Arabia and Pakistani Diaspora in the Kingdom.

Pakistan and Saudi Arabia have long-standing and historic fraternal relations, rooted deep in common faith, shared history and mutual support. Saudi Arabia is home to more than two million Pakistanis, contributing towards the progress and prosperity of both countries. The relationship is marked by frequent high-level visits, close cooperation in all fields, and mutual collaboration on regional and international issues, including at the OIC Contact Group on Jammu and Kashmir.

The PM's visit will carry forward the positive momentum of cooperation between Pakistan and Saudi Arabia.