Iran ships 'turn back' from Yemen as fighting escalates 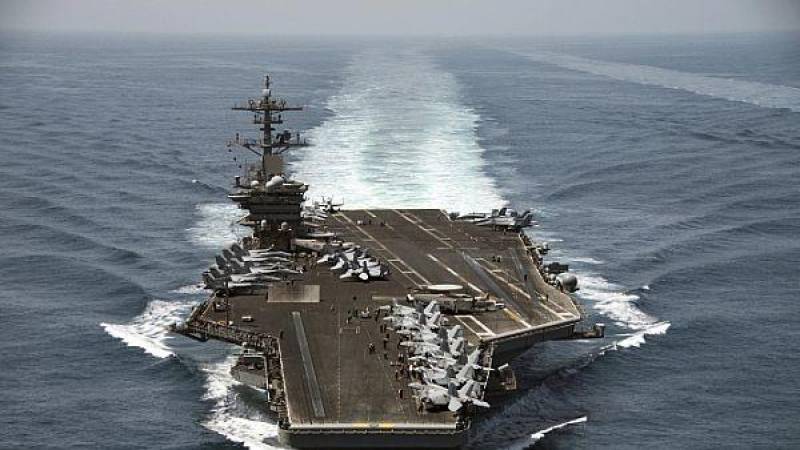 SANAA (Web Desk) - An Iranian ship convoy suspected of carrying weapons for Shiite rebels in Yemen has turned back, US officials said, as Saudi-led warplanes kept up air strikes on the anti-government forces.

The conflict has sent tensions soaring between Sunni-ruled Saudi Arabia and Shiite Iran, which backs the Houthi rebels, raising fears that Yemen could become a new front to proxy war between Middle East powers.

Yemeni Foreign Minister Riyadh Yassin on Thursday accused Tehran of trying to break a naval blockade on his country, describing the war as an "Iranian plot implemented by the Huthi militia".

A US official said the nine-ship Iranian convoy that had been heading for Yemen is "no longer on the same course".

The USS Theodore Roosevelt aircraft carrier and other American warships have deployed off Yemen's coast to track the Iranian flotilla and possibly prevent any arms deliveries to the Iran-backed Huthi Shiite rebels.

The flotilla included two "armed vessels," said the US official, who spoke on condition of anonymity.

It was possible the Iranians "could make a turn to Yemen at any time," the official added.

Iran is a key ally of the Houthis but vehemently denies arming them. It has presented a peace plan to the UN calling for a ceasefire and the formation of a unity government.

He replaces Morocco's Jamal Benomar, who resigned last week after losing support for his mediation efforts from oil-rich Gulf countries.

The Houthis swept into the capital in September from their northern stronghold, and later advanced south on the major port of Aden, forcing President Abedrabbo Mansour Hadi to flee to Riyadh last month.

The UN Security Council has imposed an arms embargo on the Houthis.

More than 1,000 people have been killed in the fighting since late March, according to the UN, which said Friday at least 115 children were among the dead.

"We believe that these are conservative figures," UN children's agency spokesman Christophe Boulierac told reporters in Geneva, saying at least 64 of the dead children were victims of air strikes.

The UN agency said 26 children had been killed by unexploded ordnance and mines, 19 by gunshots and three by shelling.