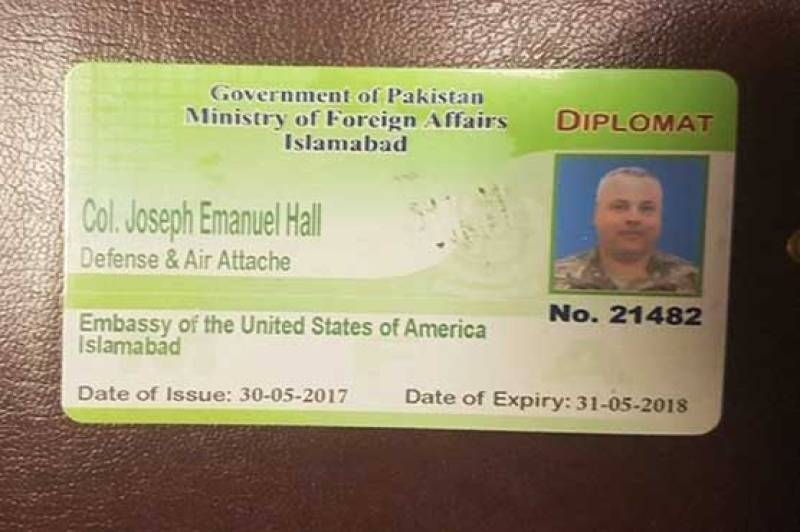 ISLAMABAD - The federal government on Tuesday informed the Islamabad High Court that the US diplomat who killed a boy in a road accident in the capital city has been placed on the blacklist.

A bench of the high court was hearing a petition seeking to put the name of US defense and air attaché Colonel Joseph Emmanuel Hall on the Exit Control List (ECL).

The diplomate, earlier this month, rammed his vehicle into a motorbike after jumping a traffic signal at the intersection of Margalla Road and 7th Avenue. A boy identified as 22-year-old Ateeq Baig died on the spot while the co-rider sustained injuries.

During today's hearing, Deputy Attorney General Raja Khalid submitted a report to the court in response to its notice, stating that the accused could not leave Pakistan as a notification regarding putting his name on the blacklist was sent to authorities of all airports in the country.

He further said that Col Joseph has a diplomatic immunity; therefore, he could not be detained and tried in Pakistan.

On April 20, the Ministry of Foreign Affairs decided not to place the name of the US diplomat on the no-fly list, as he has an exemption under the Vienna Convention, Express News reported.

The meeting also observed that Pakistani diplomats had also used this immunity over the cases of similar nature in Iran and New Delhi, adding that Islamabad was bound to follow the rules.

The family of the killed youth on April 11 moved the high court to place the name of Col Joseph on ECL.

ISLAMABAD - An application was filed with the Islamabad High Cout (IHC) seeking arrest of the US diplomat stationed in ...