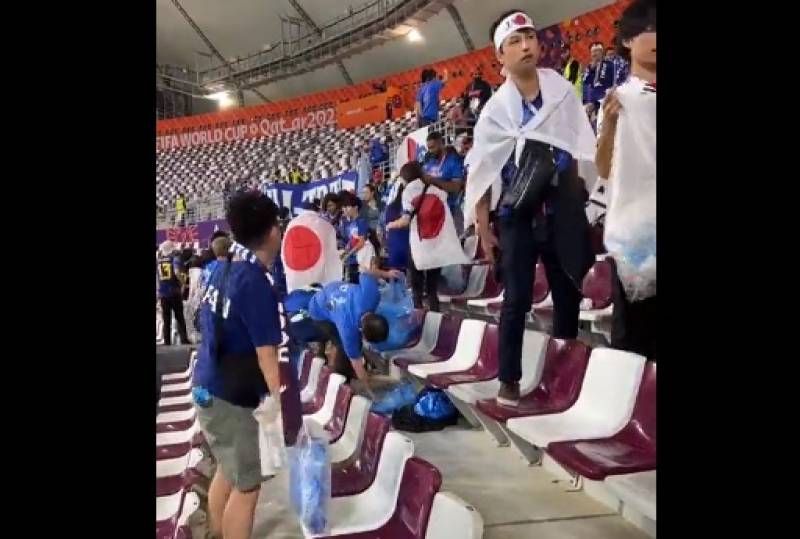 DOHA – After Japan stunned four-time champion Germany in a game of the FIFA World Cup, Japanese fans did not forget to demonstrate their best manners as they cleaned up the stadium amid the joyful moments.

A video shared by the FIFA World Cup on its Twitter handle shows only Japanese fans are present in stands of the Khalifa International Stadium after match and gathering food trays, wrappers and empty drinks cups in blue bags.

“Tidying up after one of their greatest #FIFAWorldCup wins,” it captioned the post.

Tidying up after one of their greatest #FIFAWorldCup wins 👏

The act has earned massive praise for Japanese nationals, who take cleanliness as part of their culture and are trained for it from their early childhood.

Germany took a first-half lead through Ilkay Gundogan's coolly dispatched penalty and looked likely to add to their advantage early in the second half.

However, after a couple of near misses from Serge Gnabry and goalscorer Gundogan, and a stunning series of saves from Shuichi Gonda, Japan made their move.

The Samurai Blue came from behind and upset Germany 2-1.

This was the first time Japan have ever won a World Cup match after falling behind - and what opponents to do it against! Germany, for their part, lost at the global finals from a winning half-time position for the first time since going down 3-2 to Austria all the way back in 1978.