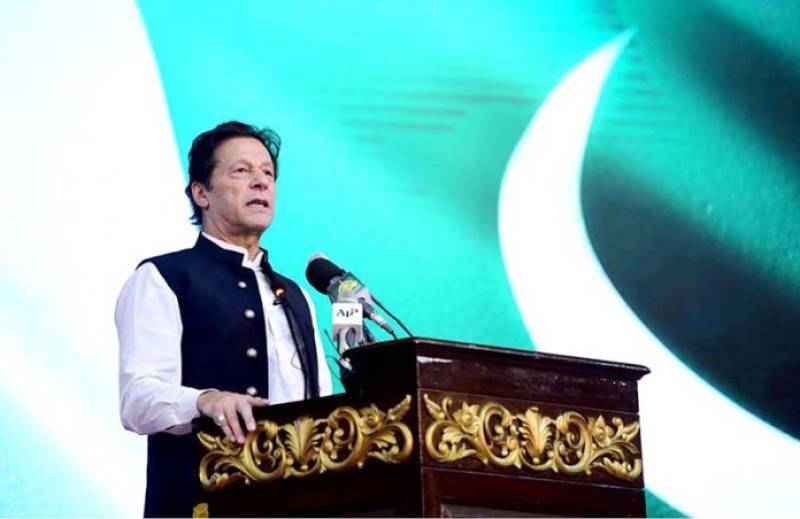 ISA KHEL -  Prime Minister Imran Khan Saturday said the time was not far off when the people would witness Pakistan emerged as one of the strongest states in the world.

Addressing the students of Cadet College of Isakhel Tehsil in Mianwali district after inaugurating a hostel building there and breaking ground for a mega water supply scheme for Isakhel and adjacent areas, the prime minister said since his entering into politics to becoming the prime minister, the people of Mianwali had stood beside him despite the discouraging notions by the opposition parties.

“When I got first (National Assembly) seat from Mianwali, I was mocked by some people as to how I will defeat the two old political parties. When I won (2018 general election), they asked how I will make a Naya Pakistan.

All this will be done, Insha Allah. You will feel proud as the time is not far. You will just have to wait a bit more. You will see Pakistan become one of the strongest countries in the world,” he remarked.

Imran Khan said the people of Mianwali had stood by him when no one was with him.

They stood by him when it was questioned how a sportsman could do politics. “The people of Isakhel won me the first (assembly) seat for the Pakistan Tehreek-e-Insaf (PTI),” he recalled.

The prime minister, who earlier broke ground of a Rs 3.25 billion water supply scheme for the Khattak belt, said it would suffice the water needs of all the union councils of the area except two.

He said during his visits to the region for the last 24 years, most of the applications he had received from the people were related to water, fake FIRs (first information reports) by the powerful against the poor ones, and shortage of school or girls school teachers, nurses, and doctors.

As the doctors were mostly reluctant to be posted in the area, the government would come up with a policy to allow the local hospitals to hire their own doctors, instead of waiting to get them from the health department, he added.

Similarly, the shortage of girls school teachers would be addressed the same way, he said.

Reiterating his firmness on his decision to nominate Usman Buzdar as Punjab chief minister, he said a person hailing from a backward area could well realize the needs and pains of the underdeveloped areas instead of those who lived in palaces at Lahore.

“Those living in palaces in Lahore and getting their medical checkup in London, when becoming chief minister, cannot feel how the people (of backward areas) live,” he remarked.

He said the State of Madina was based on two major principles of rule of law and humanity, and the Western countries like Denmark, Sweden and Norway achieved prosperity by adhering to the very model.

He said society could not survive for long where the people rotted in jails for minor thefts while those, who had looted billions, considered them untouchable.

The major objective of the State of Madina, he said, was to uplift the poor and protect them from any exploitation or victimization by the powerful ones.

The prime minister directed the Inspector General of Punjab Police and other senior officers to keep an eye on the police stations so that the weak people could not be victimized there.

“We have to start it from this district. The police, and katchery, and patwari politics were used to terrorize and force the people to vote for some influential person.

I want to make you liberated (from this pressure) with no fear of the powerful people,” he remarked.

The prime minister resolved that the government would provide all-out funding for upgrading the cadet college to fulfill the education needs of the area.

Referring to the visit of Namal University on his agenda, he said a Knowledge City would be developed there to house facilities like schools and research centers to enhance agriculture yield, and develop new seed technologies.

“Nations can excel just through the knowledge economy. They do not progress or become rich by just selling cotton or textile products. The richness comes when you invest in the people and provide them higher education,” he added.

He said the students of Namal University had obtained first division from Bradford University while being in Pakistan which manifested a huge talent in the area.

The prime minister also took an aerial view of the water supply scheme for Isakhel and adjacent areas.

The clean drinking water supply project would cost Rs 3.2 billion, 80 percent of which would be funded by the Federal Government and 20 percent by the provincial government.

The project would ensure a supply of 3.4 million gallons per day water to a population of around 250,000 people in 87 towns and 151 villages.

To be powered by solar energy, the project would also have a three-month water conservation capacity to cope with the needs during the dry season.

During the visit, the prime minister was also given a briefing on Rs 19 billion Mianwali Development Package comprising rehabilitation and dualization of roads, the revival of 46 water schemes, reconstruction and uplift of Piplan and Kalabagh Tehsil hospitals, 200-bed maternity hospital, the addition of 400 classrooms in schools, construction of 77 shabby school buildings and Mianwali University projects.

The prime minister also launched the anti-polio drive by administering a vaccine to a child marking World Polio Day (October 24) with an aim to make Pakistan a polio-free country.