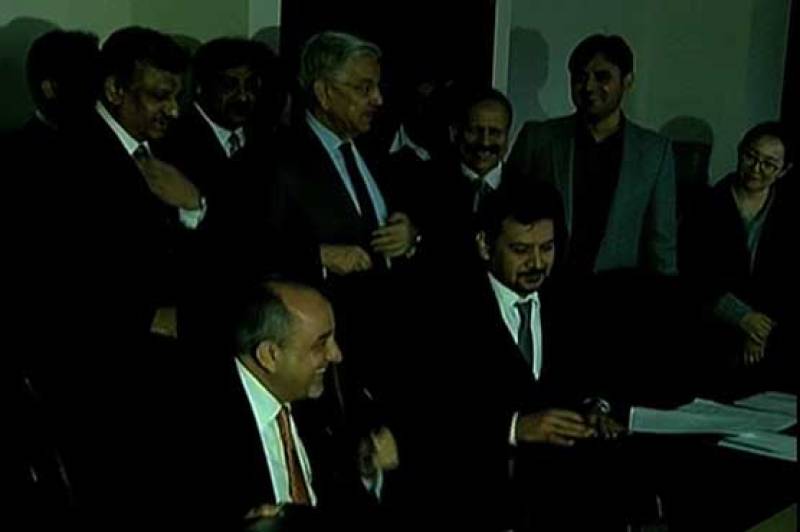 ISLAMABAD – A ceremony to sign four agreements to set up two coal-based power plants of 1650 megawatt with China was hit by electricity loadshedding twice that interrupted the signing ceremony, the local media reported.

The officials had to use torches of their cell phones to read the agreement papers and wait till the restoration of electricity to sign the agreement.

According to the APP, the government signed four agreements on Wednesday to set up two coal-based power plants in Hub and Thar under China Pakistan Economic Corridor (CPEC) project. The agreements included two each for implementation and power purchase.

The agreements were signed by representatives of China Power Hub Generation Company (Private) Limited (CPHGC), HUBCO and Private Power Infrastructure Board (PPIB) on behalf of their respective organizations.

Under the agreements, 1320 MW coal power plant is being set up in Hub, Balochistan with estimated cost of over $2 billion while 330 MW will be established in Thar, Sindh at a cost of $500 million.

He said the government was also fully implementing projects to be completed after its tenure keeping in view the future requirements of energy.

Asif said preference was being given to local coal from Thar for generating cheap electricity. These projects would open up new chapter in the energy sector, he said adding that Thar would be centre of energy for the country in future.

He said it would not only help save precious foreign exchange but also generate electricity at affordable rates to the consumers.

The minister said that signing of the agreements was a great achievement.

Regarding Thar project, he said it was a pilot project and it would attract huge investment in future.

To a query, Asif said Nandipur power plant was supplying 430 MW and furnace oil treatment plant (FOTP) had already been set up. Gasification process of the plant has already been started and it would be run on gas in May, he said.

He said payment had also been made to Sui Northern Gas Company for laying pipeline to supply gas to the plant.

Regarding Bhasha and Mohmand dams, the minister said ground breaking of both projects would be carried out this year.