Over 200 burnt to death, 100 injured as oil tanker catches fire near Bahawalpur 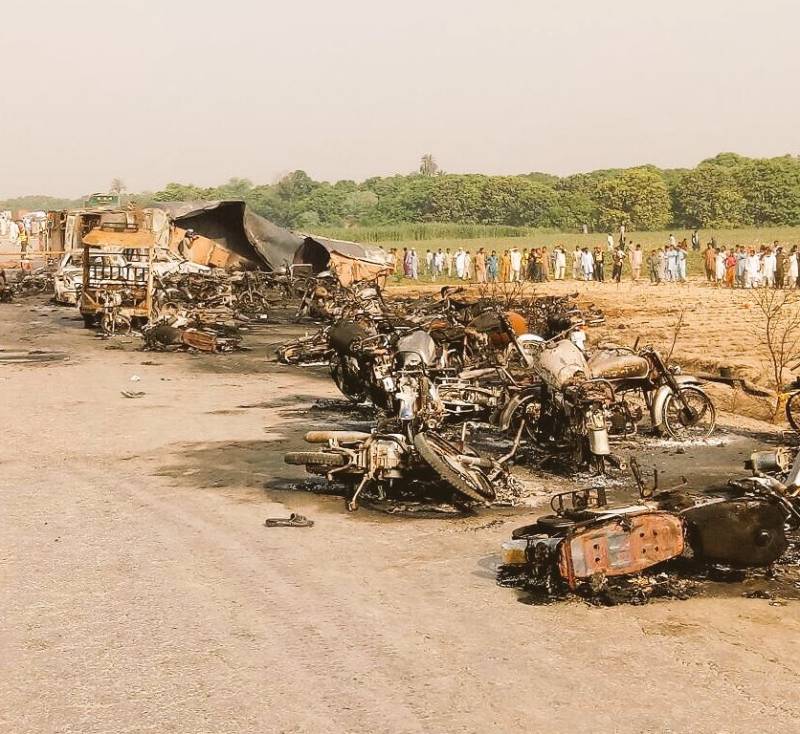 BAHAWALPUR - At least 200 people were burnt to death while around 100 others were left injured as an oil tanker caught fire after overturning on National Highway in Ahmedpur Sharqia near Bahawalpur this morning.

According to rescue sources, an oil tanker turned upside down on Pakka Pul apparently due to over speeding after which people from the village Basti Ramzan Joiya area swarmed the site to collect fuel that was spilling from the oil tanker however, unfortunately the fuel burst into flames. 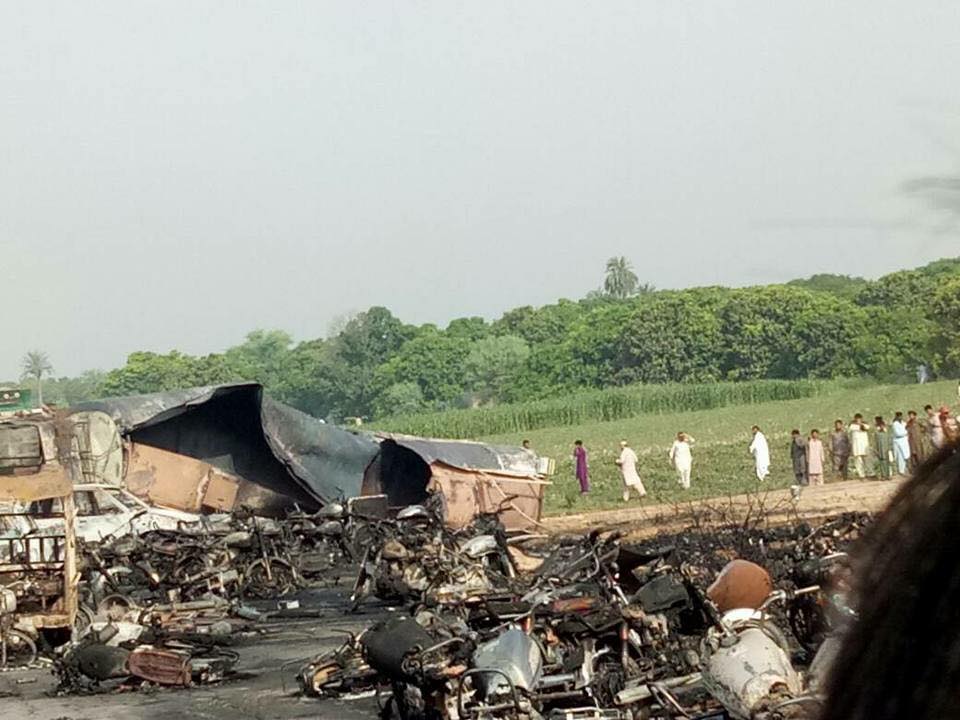 Eyewitnesses said some people in the vicinity were smoking cigarettes, which could have ignited the deadly fire that killed 140 people including women and kids however, it is feared that the death toll could mount further.

Rescue workers shifted the injured to the Bahawalpur Victoria hospital. They said a DNA test would be needed for identification of deceased due to charred bodies.

Medical Superintendent of Bahawalpur Victoria Hospital Dr. Amir Bukhari while talking to ARY News detailed that the district administration was facilitating the victims.

'Emergency has been declared in hospitals' said Dr. Amir.

On the other hand, the Deputy Commissioner of Bahawalpur Rana Muhamamd Saleem Afzal confirmed that there was no burns unit in Bahawalpur and the injured would be shifted to Multan for treatment.

Punjab's law minister Rana Sana Ullah in a telephonic conversation with Ary News said that burns unit could not be established in each hospital adding that the driver of oil tanker was detained.

Traffic was suspended on the National Highway route following the incident. However, the motorway police set up two diversions, near Noorpur Nauranga and further ahead of Dera Nawaz, as the highway is frequently used for travel between Bahawalpur and Lahore.

The diversions have been created also because the volume of traffic on the route is likely to increase as people would be using the National Highway to travel to their hometowns for Eid-ul-Fitr that is expected to be celebrated in many parts of Pakistan on Monday (tomorrow).

It bears mentioning that Sunday's catastrophe was the deadliest one in the history of Bahawalpur located about 450 km south of provincial capital Lahore.

He deployed helicopter of Punjab government to help the victims at the site.

Punjab govt's spokesperson Malik Ahmed Khan while talking to Geo News expressed that the victims would be shifted to different hospitals across the province.

When asked whether all the hospitals across Punjab could handle the situation, Malik Ahmed Khan replied that he was collecting statistics after which he would be able to respond.

Chief of Army Staff General Qamar Javed Bajwa expressed grief on the loss of lives and ordered provision of assistance to civil administration.

Director-General Intra-Services Public Relations took to Twitter and confirmed that Army helicopters were being sent for the evacuation of casualties.

The helicopters reached the site and started rescue operation to shift the severely injured to Multan and other cities for proper treatment. 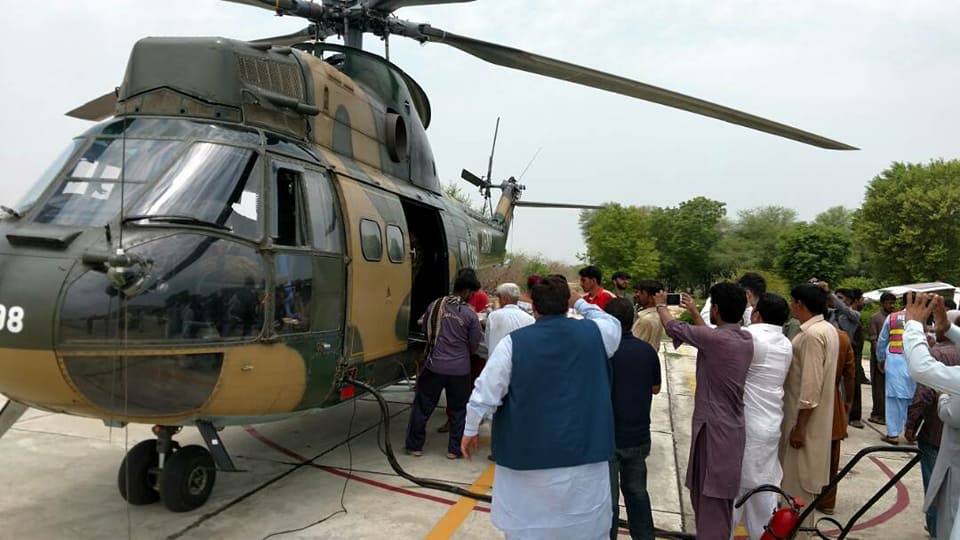 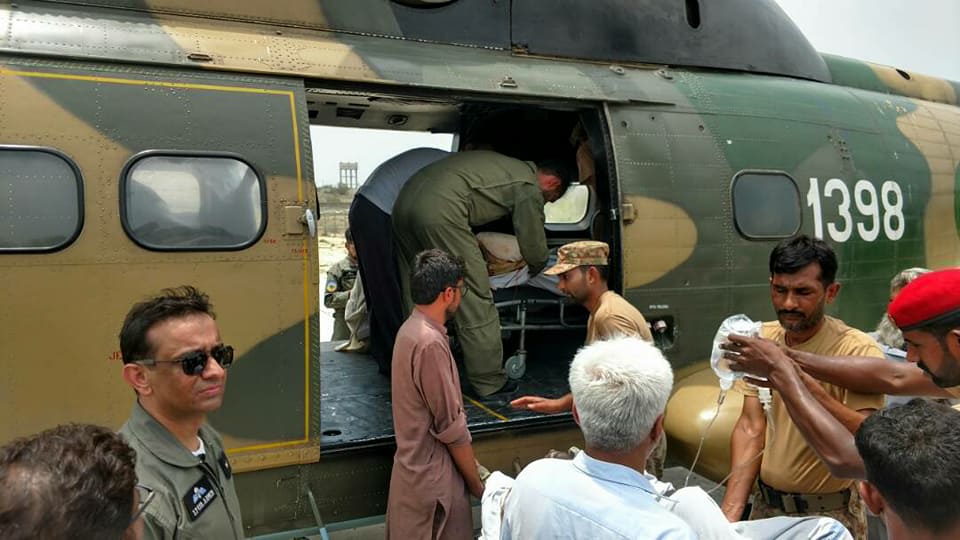 Have asked ldrship present in area to immed assess what assistance can be provided to the injured and to families of victims. https://t.co/E1aTtoocke

#Quetta, #Parachinar, #Karachi and now #Bahawalpur accident. Injuries/Loss of precious lives/dear ones has taken away this Eid from so many.

Our deep condolences to the families and loved ones of the victims. #Bahawalpur #USEmbassyISB pic.twitter.com/I8kAV1C4Tj

#Bahawalpur the death toll keeps rising please remember they are not just statistics these are human beings with families !

So disconnected as a nation -celebrating whilst 100s of our citizens mourn. No triumph this #Eid #Parachinar #Quetta #Bahawalpur #Pakistan 💔

What a terrible tragedy in #Bahawalpur May Allah have mercy on us all. Sad sad sad

Small human mistake created big tragedy.Heart bleeding tears on the death of more than 120 people in an accident in Bahawalpur

How can we celebrate #Eid yesterday blasts in #quetta #parachanar and today another tragedy #OilTanker accident caused 200 lives:(

Quetta/Parachinar killings followed by Bahawalpur tragedy leave a lump in heart. But then life goes on: remember them while celebrating Eid