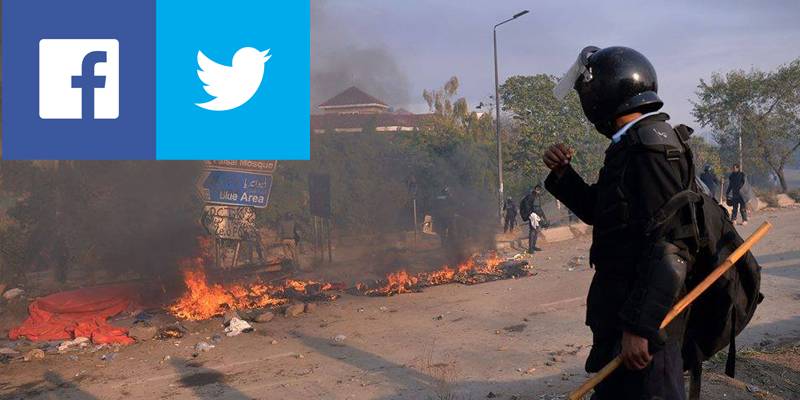 Many users reported a “total blackout”, while others only experienced issues with some features - including logging in to both the website and its mobile app, sending messages and posting status.

A statement issued later on Saturday stated TV channels are advised to exhibit utmost sensitivity regarding the matter and refrain from live coverage.

According to a PEMRA spokesperson, Prime Minister Shahid Khaqan Abbasi has directed the regulatory authority to suspend transmission of all private news channels, on the request of Islamabad administration.

PEMRA took the decision after the channels started live coverage of the operation that led to difficulties in carrying out full throttle action.

The official word came amidst a grand operation by Islamabad police, with the help of Frontier Constabulary personnel and other law enforcement agencies, against protesters who had camped out at the Faizabad Interchange since November 8.

The crackdown which is currently underway was launched after the last of a long series of deadlines lapsed on Saturday morning without a response from the agitating parties.

Now they think baning the internet services , twitter, fb and YouTube to control the protest wtf is this #protest#Government#Pakistan#Islamabad