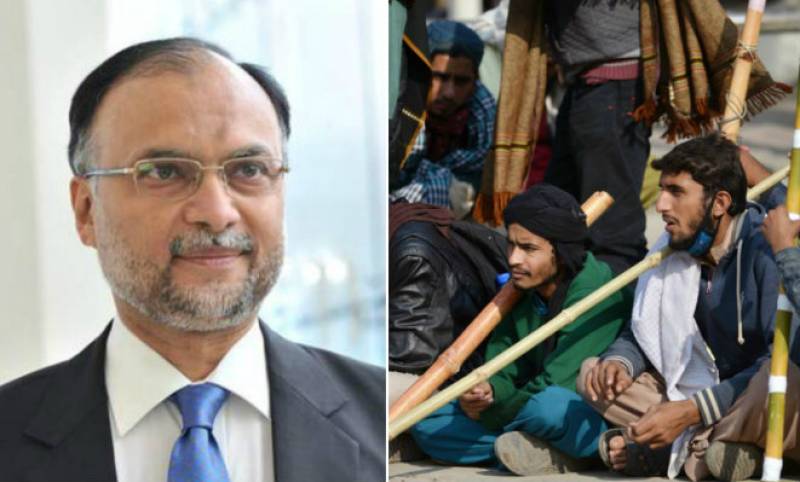 ISLAMABAD - The religious parties protesting in Islamabad had 'contacted India', Interior Minister Ahsan Iqbal claimed on Saturday, adding that the government was investigating the matter.

Iqbal told DawnNews that the protesters “are not simple people”. “We can see that they have various resources at their disposal. They have fired tear gas shells [at security forces], they also cut the fibre optic cables of cameras that were monitoring their protest."

"Why they did it (contact India), we are looking into it. They have inside information and resources that are being used against the state," the minister added.

The interior minister reiterated that the government was attempting to clear the sit-in as part of its legal obligations after the Islamabad High Court (IHC) ordered the capital administration to evict protesters from Faizabad last Friday.

"Our administration is acting on the court's orders and we are completely supporting them," he said.

"We are trying to clear the area with minimum violence, but we also need to ensure the fundamental rights of people of the twin cities," he asserted.

"If you want to do your politics, do it, but why are you using this issue to incite hatred?" he questioned.

A day earlier, the country’s premier spy agency - Inter-Services Intelligence - told the Supreme Court that the religious groups staging a sit-in at the Faizabad interchange Islamabad were pursuing political motives.

In its report submitted to the top court regarding the suo moto notice taken by a two-member bench pertaining to the ongoing protest, the spy agency revealed that the protesters had taken to the streets in a bid to gain popularity ahead of the next general elections.

The report, which was made public by the apex court as it issued the written judgment of Friday’s proceedings, also stated that the actions of demonstrators were in contradiction to Islamic injunctions.

In its order, the top court remarked that the use of force was not necessary to evict the religious parties that were occupying the thoroughfare for the last 17 days.

It also declared that Islam was a religion of peace and the same was the essence of its teachings.

The interior minister’s remarks came hours after Islamabad Police, with the help of Frontier Constabulary personnel and other law enforcement agencies, launched a grand operation on Saturday morning to disperse protesters who have camped out at the Faizabad Interchange since November 8.

Police used tear gas and water cannons and fought running battles with stone-throwing protestors, as they moved to clear a protest by the religious hard-liners who have blocked main routes into Islamabad for more than two weeks.

Meanwhile, the Pakistan Electronic Media Regulatory Authority (Pemra) ordered private television channels to go off air during the clash, besides blacking out social media. The suspension was ordered for violating media regulations showing live coverage of a security operation, a statement from the regulator said.

At least 200 people - including protesters and security forces - were injured as police, the Frontier Constabulary and other law enforcement agencies employed teargas shelling and rubber bullets to disperse the agitators, who have held an 18-day-long sit-in despite repeated requests by the government to clear the area. In response, the protesters have been using stones and rocks to attack the advancing security forces.

The crackdown ordered by the Islamabad High Court was launched after the last of a long series of deadlines lapsed today morning without response from the agitating parties.

Rangers have been called in all major cities of Punjab, in order to ensure law and order.