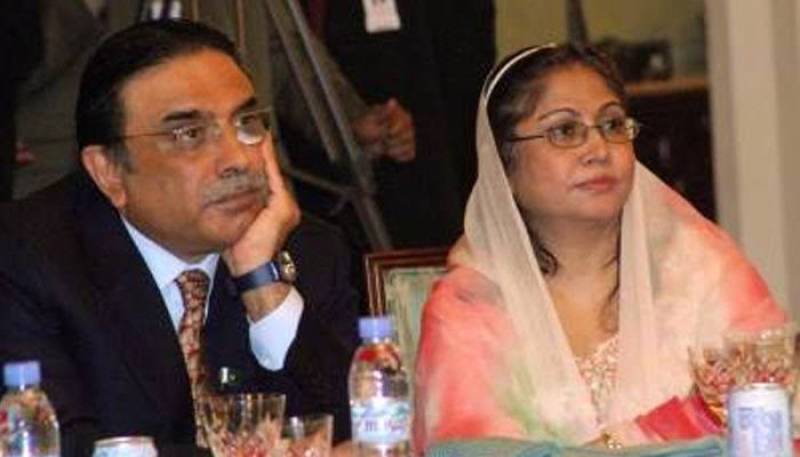 According to a press release, the accused Asif Ali Zardari and Faryal Talpur in connivance with other accused misappropriated the funds of Summit Bank by releasing unauthorized payments to M/s Regent Services and various fake/benami vendors including A-One International for purchase of G-2 Land and its construction.

The accused are also involved in approval of fraudulent finance facility to beneficial owners of Alfa Zulu Co. Pvt. Ltd and Plaza Enterprises Pvt. Ltd through benemidars and its misappropriation by placing in fake accounts as well as routing through different entities.

A sum of Rs 1200 million from sundry account of Summit Bank Limited was illegally transferred and misappropriated with malafide intention by the accused persons.

Likewise, a sum of Rs 950 million was also transferred from the sundry account of Summit Bank to extend undue benefit and favour to accused persons specially Asif Ali Zardari.

That investigation further established that Anver Majid, Abdul Ghani Majid, Mustafa Z. Majid and Imran Khan in this matter played pivotal role in commission of offence for generation of hefty amounts illegally with active connivance of Hussain Lawai and Taha Raza for the benefit of Asif Ali Zardari.

The liabilities calculated so far in respect of collusive spending by Summit Bank Ltd on purchase and construction of Plot No. G-2 is Rs. 7,020 million, misappropriated amount of Fraudulent Finance Facility through M/s Alfa Zulu Co. Pvt Ltd is Rs 700 million and amounts of Fake Account utilized by the accused persons out of Rs. 4.4 billion deposited into the account of A-One International is taken up so far to the extent of debited liability of Rs. 436.6 million to avoid overlapping in other ongoing cases/inquiries.