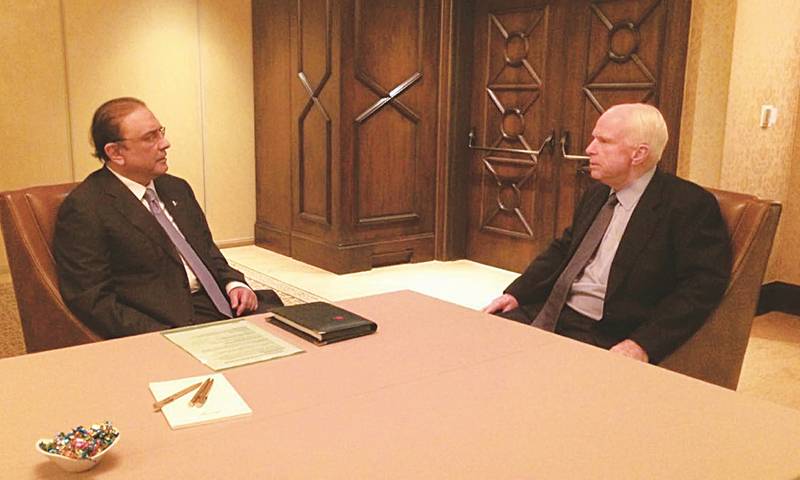 According to a statement released by Pakistan People's Party (PPP) spokesman, the US senator appraised the former President that the bill seeking Pakistan to be declared as a terror-sponsoring state would not be entertained at the US Congress.

McCain said the armed forces of Pakistan have taken crucial initiatives to wipe terrorists out of the country and the bill tabled by two lawmakers must not be seen as an indication of deteriorating Pak-US ties.

During the telephonic conversation, Zardari took up the Indian atrocities in Occupied Kashmir with the US senator. He said Pakistan wanted a peaceful resolution of the Kashmir issue through dialogue and in accordance with the wishes of the people of Kashmir.

He further argued that Pakistan is a victim of terrorism, rather than a sponsor. The Indian government and the media are running an anti-Pakistan campaign globally, he added.

Both leaders agreed that Pakistan is a major stakeholder in Kashmir issue and the interest of the region lies in earliest and peaceful resolution of the problem.

Last week, Republican Senator Ted Poe and Democrat Senator Dana Rohrabacher moved a bill titled "The Pakistan State Sponsor of Terrorism Designation Act" in the US Congress seeking Pakistan to be designated as a terrorist state.