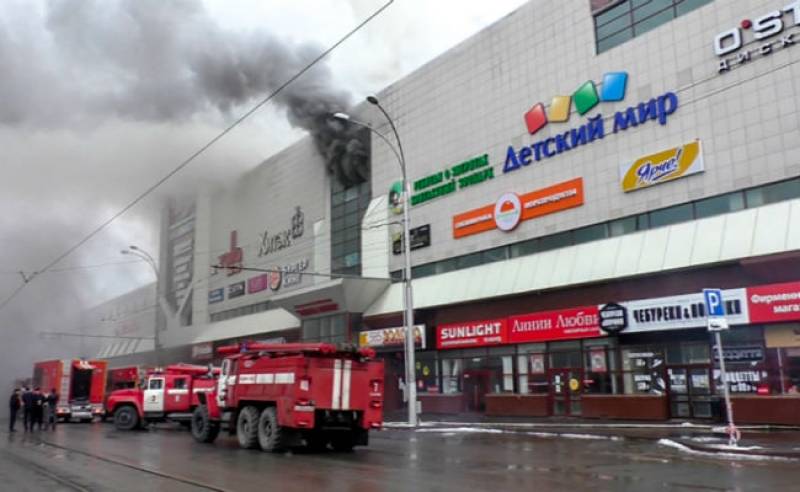 MOSCOW – At least 64 people, including nine children, have been killed in a fire at a busy shopping centre in Russia, according to state media.

The fire broke out in at the four-storey Zimnyaya Vishnya (Winter Cherry) Mall in an industrial city Kemerovo, in western Siberia, Tass reported on Monday.

The blaze started on an upper floor of the Winter Cherry complex during school holidays. The mall's shops, cinema and bowling alley were packed at the time.

Some 660 emergency personnel were deployed in the rescue effort.

The injured are being treated in a hospital. Others received medical attention at the scene.

Nearly 16 others have been reported missing.

Four people have been detained for questioning, including the head of the company that manages the shopping centre. The owner of the Winter Cherry complex is among those being held.

In March 2015, a shopping mall fire killed 11 people in Kazan, the capital of Tatarstan some 800 kilometres (500 miles) east of Moscow.

In April 2013, a fire ravaged a psychiatric hospital in the Moscow region, killing 38 people, most of the patients who were engulfed by flames as they slept behind barred windows.

Just months later, in September 2013, 37 people were killed when a fire swept through a psychiatric hospital in the village of Luka in northwest Russia.

In 2009, 156 were killed in a nightclub fire in the city of Perm, 1,200 kilometres east of Moscow in one of the deadliest accidents in Russia’s modern history.