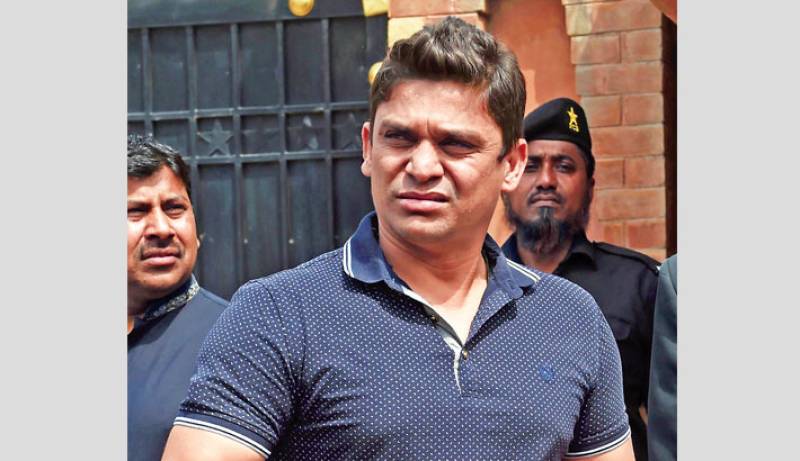 LAHORE - Khalid Latif, who was handed five-year ban for his role in the spot-fixing scandal that engulfed the Pakistan Super League (PSL) 2017, has announced a reward to anyone who will kill the Dutchmen behind a blasphemous cartoon competition that depicts Prophet Muhammad (Peace Be upon Him).

In a video shared on Facebook, the 32-year-old batsman announced to put a Rs3 million bounty on the heads of firebrand Dutch politician Geert Wilders and his far-right party colleagues while expressing his pain and anguish over the sacrilegious artwork in the Netherlands.

On June 12, the Dutch Party for Freedom, led by Geert Wilders and known for its opposition to Islam and Muslim immigration to the Netherlands and Europe in general, announced that it would hold a contest for caricatures of the Prophet Muhammad (PBUH) in its offices in the Dutch parliament.

PVV is the second-largest party in the Dutch House of Representatives.

Wilders tweeted that he had received clearance from the Dutch counterterrorism agency - National Coordinator of Counterterrorism and Security (NCTV) - to hold the competition in his party’s parliamentary offices.

So that’s what we’re going to do and organize! With cartoonist/ex-Muslim Bosch Fawstin!

Freedom of speech is most important of all!! pic.twitter.com/hOYdQBRLRl

The contest is to be judged by American cartoonist and former Muslim Bosch Fawstin, who won a similar contest in the US in 2015.

The initiative quickly provoked furious responses and calls for its cancellation that were shared on social networks, as well as overt threats from Muslims against Wilders and other contest participants.

In 2015, two French terrorists who had sworn allegiance to al-Qaeda killed 12 people at satirical magazine Charlie Hebdo’s offices with the terrorists notably seeking to punish the staunchly atheist magazine for printing cartoons of the Prophet (PBUH).

The attack was the first in a wave of terror attacks in France over the past three years that have left more than 240 people dead.

Meanwhile, Tehreek-i-Labbaik Pakistan (TLP), a religio-political party, has decided to come at roads and “stay on the streets until either the publication of blasphemous cartoons in the Netherlands end or the government immediately ends diplomatic ties with the Dutch”.

TLP, which emerged as the fifth largest political party in the General Elections 2018, urged the Pakistan Tehreek-i-Insaf (PTI) government to not only “discontinue diplomatic and commercial relations with the Netherlands” but also “demand from other Islamic countries to do the same”.

Moreover, Maulana Khadim Rizvi-led TLP also demands that since the said competition’s judge is an American national, “therefore, strict measures should also be taken against the US”. According to the sources, the party “will take to the streets at 2 pm on Wednesday (August 29) and begin from Data Darbar Lahore its march towards the capital.”

Today, in his maiden address to the Senate, Prime Minister Imran Khan said that his government will raise the issue of blasphemous caricatures in the United Nations General Assembly (UNGA) while putting the blame of such incidents on lack of unity among the Muslim countries.

PM Imran called it a “collective failure” of Muslim countries for the absence of an international policy against blasphemous content.

Earlier today, the Senate passed a resolution to bring the UN’s attention to the matter regarding the controversial announcement by the leader of Dutch Freedom Party.

“This House strongly condemns the venomous, vicious and contemptuous decision of Geert Wilders, the notorious Islamophobe, belonging to the Dutch Party of Freedom, to hold a ‘Draw Muhammad Cartoon Competition’ to be held later this year in Netherlands,” read the resolution.

ISLAMABAD - A unanimous resolution was adopted on Monday in the upper house of legislative chamber against the ...

“The House considers that the proposed competition tantamount to inciting hatred, racial prejudice, unrest, conflict and insecurity in a world that has already seen much bloodshed, racism, extremism, intolerance and Islamophobia and badly needs peace, interfaith harmony, mutual respect and tolerance.”

On August 20, Pakistan’s Foreign Office (FO) had called the charge d’affaires of the Netherlands to record a protest against Wilders’ announcement to hold a competition of blasphemous caricatures.

According to a statement issued by the Foreign Office, Pakistan’s Ambassador in The Hague was also instructed “to forcefully raise the issue with the Dutch government along with Ambassadors of Organisation of Islamic Cooperation (OIC) member states.”

Over 220 million people live in Pakistan, making it the sixth largest nation in the world. Islam is the state religion of Pakistan, and about 95-98% of Pakistanis are Muslim. The South Asian country has the second largest number of Muslims in the world after Indonesia.