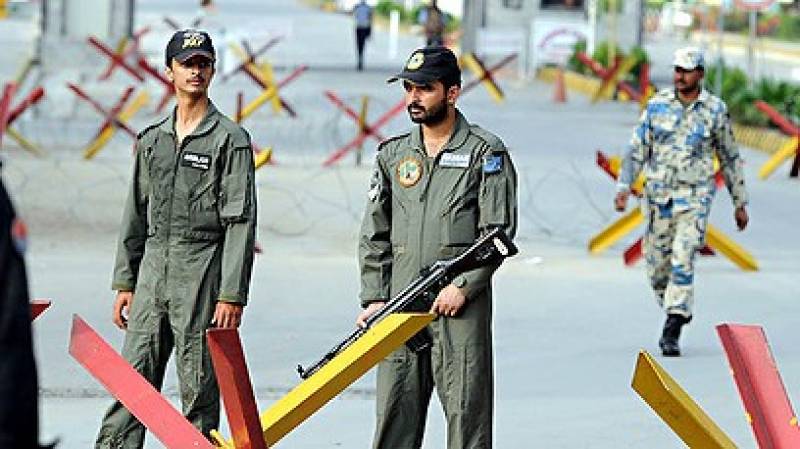 QUETTA – Security forces on Sunday night foiled a terror bid at an airbase in southwestern Balochistan province, according to media reports.

Four terrorists opened fire at a police check post near Samangli airbase in Quetta late at night. Two terrorists were killed in retaliatory fire while two managed to flee.

Security sources said that the area has been cordoned off to search for the escapee terrorists.

The dead bodies of the terrorists killed in the exchange of fire have been shifted to Civil Hospital Quetta .

PESHAWAR – An Army soldier embraced martyrdom in exchange of fire with terrorists, who raided Makki Garh Post in ...

Meanwhile, one soldier was martyred as the Pakistan Army repulsed a terrorist attack at Makki Garh post in North Waziristan’s Shawal valley.

According to Inter-Services Public Relations (ISPR), the terrorists attacked Pakistan Army post along the border in Shawal, North Waziristan Agency on Sunday.

The ISPR said that five bullet ridden dead bodies were found from a nullah approximately 1.5 kilometres away from Khar Kamar post during patrol in Boyya area.

The security forces valiantly repulsed all attempts to overrun posts and inflict major damage. Five terrorists were killed during the failed attempts, it added.

During exchange of fire, one Pakistan Army soldier was martyred.

The identification process of the bodies was underway, it added.

Earlier in May, one security officer was killed when three unidentified armed individuals stormed the five-star Pearl Continental (PC) hotel in the southern Pakistani city of Gwadar, located in the province of Balochistan .

The Balochistan Liberation Army separatist organization, qualified as a terrorist group by Pakistan , claimed responsibility for the attack in the southwestern province.

Baloch separatists have been reportedly struggling to create an independent state since 1947.